Campaigners may seek judicial review over ‘Battle of Orgreave’ 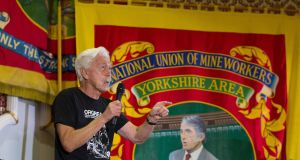 Granville Williams of the Orgreave Truth and Justice Campaign: MPs accused home secretary Amber Rudd of betraying members of the campaign after leading them to believe she would approve an inquiry. Photograph: Lindsey Parnaby/AFP/Getty Images

Campaigners have said they will consider seeking a judicial review into the British government’s refusal to hold an inquiry into police conduct during a clash with striking miners at the south Yorkshire village of Orgreave in 1984.

MPs accused home secretary Amber Rudd of betraying members of the Orgreave Truth and Justice Campaign after leading them to believe she was poised to approve an inquiry.

“It is utterly cruel to have given the campaigners false hope and misled them in this way. We will never give up this fight,” Labour’s Andy Burnham told the House of Commons.

The Battle of Orgreave in June 1984 was one of the most violent clashes of the miners’ strike and is cited as one of the most notorious examples of police misconduct in recent British history. For decades, campaigners have called for a full inquiry into how the police behaved on the day, how they concocted evidence later and whether the confrontation had been deliberately set up by the authorities.

Ninety-five miners were arrested and most were charged with riot, an offence that carried a life sentence, but all the cases collapsed after police evidence was found to be unreliable. Many police officers signed statements which used almost identical language, and one signed a statement written in somebody else’s handwriting.

Ms Rudd won praise from campaigners in September when she told them she was close to making a decision about an inquiry. However, she said on Monday that a review would not be in the public interest.

In a letter to campaigners, the home secretary said policing had changed sufficiently in the years since Orgreave to mean an inquiry was not merited, adding that “ultimately there were no deaths or wrongful convictions”.

Barbara Jackson, secretary of the Orgreave Truth and Justice Campaign, told a crowd of former miners and their supporters in Barnsley that she was “shocked and devastated” by the decision.

“As you can all tell, this is very difficult and very disappointing but there are options for the future; some of them we will be discussing with the legal people about the possibility of a judicial review,” she said.

Mr Burnham criticised Ms Rudd’s failure to face questions from MPs on Tuesday and demanded to know if she reviewed all new evidence about Orgreave before ruling out an inquiry.

“Did she consider in detail the new testimony that has emerged from police officers, particularly in relation to police statements? Did she review all relevant cabinet papers, such as the minutes – stamped “Secret” – of the meeting between Margaret Thatcher and Leon Brittan, in which the then home secretary said he wanted ‘to increase the rate of prosecutions’ of miners?” he said.

Other Labour MPs joined in the criticism of Ms Rudd’s decision but Conservative Philip Davies provoked uproar when he claimed that the miners had been responsible for the violence at Orgreave.

“Unlike most of the people bleating on the Labour benches, I actually lived in South Yorkshire in a mining community during the time of the miners’ strike and saw at first hand the bullying and intimidation from the miners that went on. People who did not contribute to the strike fund had their windows done in,” he said.

“These people were trying to bring down the democratically elected government of the time. They lost, and they need to get over it.”