Cameron tells Tories to ‘vote with your heart’ on Brexit 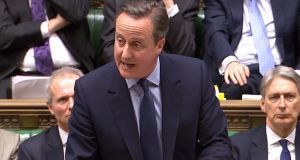 Conservative MPs should ignore their constituents or what they feel may be “advantageous” and vote “with their hearts” in the referendum on Britain’s membership of the EU, David Cameron has said.

The British prime minister told his party colleagues to take their own view of what they feel is right for the country rather than worrying about future elections.

In what may be interpreted as a reference to those seeking to succeed him as Tory leader, Mr Cameron also told MPs not to vote a certain way if they “think it might be advantageous”.

Speculation has been rife that Boris Johnson or Home Secretary Theresa May may back the Leave campaign in order to build support among Tory Eurosceptics to further their leadership ambitions.

But during his statement on the renegotiation of Britain’s EU membership, Mr Cameron said: “If you passionately believe in your heart that Britain is better off outside the EU, then you should vote that way.

“If you think, even if it’s on balance, I think Britain’s better off in, go with what you think.

Securing the package of proposed reforms to Britain’s relationship with the European Union will need hard work and patience but real progress has been made, Mr Cameron said earlier.

He told MPs the plans put forward by Brussels were the strongest ever achieved on freedom of movement rules. But he admitted the details would need to be pinned down during the course of the “intense” round of negotiations that will be held in the run up to the meeting of EU leaders later this month.

“I believe we are making real progress in all four areas but the process is far from over,” he said.

“There are details that still need to be pinned down and intense negotiations to try and agree the deal with 27 other countries.

“It will require hard work, determination and patience to see it through but I believe that with these draft texts and with all the work we have done with our European partners Britain is getting closer to the decision point.”

“For all the sound and fury, the prime minister has ended up exactly where he knew he would be making the case to remain in Europe which was what he always intended despite a renegotiated spectacle choreographed for TV cameras over the continent,” he said.

Mr Cameron, who was updating MPs after the draft deal drawn up with European Council president Donald Tusk was published on Tuesday, has faced intense criticism over the plans.

Former defence secretary Liam Fox predicted up to five Cabinet ministers will back Brexit in the upcoming referendum, and warned that the prime minister risks creating a lasting split in the Conservative Party if he tries to gag them from speaking out any longer.

In a telephone call on Monday evening US president Barack Obama again underlined his desire to see Britain remain within the EU. In Strasbourg, European Commission president Jean-Claude Juncker hailed the draft deal as “fair for the UK and fair for the other 27 member states”.

Mr Cameron later added further fuel to speculation of a June 23rd referendum, telling MPs that if a deal is agreed at the February 18th/19th summit, four months “would not be too short” a period before staging the vote.