Boris Johnson: Odds of no-deal Brexit are ‘a million-to-one against’ 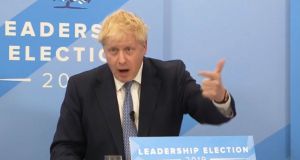 Boris Johnson speaking during a live digital hustings on Wednesday as he faced questions from the public, hosted on the Conservative party’s Facebook page. Screengrab: Conservatives/Facebook/PA Wire

Boris Johnson has said the chances of a no-deal Brexit are a “million-to-one against”, despite promising to leave on October 31st whether or not he has managed to strike a new agreement with the European Union.

Mr Johnson, the frontrunner to be prime minister, told a hustings that the chances of a no-deal Brexit were vanishingly small, as he believed there was a mood in the EU and among MPs to pass a new Brexit deal.

He said there was a new feeling of “common sense breaking out” among MPs in favour of passing a deal, despite many of his Eurosceptic backers believing he is readying himself for a no-deal Brexit.

It comes just a day after he promised in a TalkRadio interview to leave the EU on October 31st “come what may, do or die”, raising fears among moderate Tory MPs and opposition parties that he was intending to push through a no-deal Brexit.

The EU has repeatedly said it will not revisit Theresa May’s withdrawal deal and experts are severely sceptical that a new prime minister can secure any changes to the controversial Northern Ireland backstop hated by Eurosceptics by the end of October.

Many of Mr Johnson’s Eurosceptic backers are convinced that he will push through a no-deal Brexit by simply ignoring the will of parliament, where a cross-party group of MPs are planning to try everything possible to block this possibility.

However, Mr Johnson said he was supremely confident he could secure a new deal with the EU that would satisfy parliament. He played down the idea that he would simply sideline parliament or prorogue it in order to secure a departure on October 31st, but did not entirely rule it out. “I’m not attracted to archaic devices like proroguing,” he said.

The former London mayor also said it would be “absolutely crazy” to think about a general election before Brexit is done, despite the fact he could be forced into one if MPs vote down his government in a confidence vote.

He also said he would not give Nigel Farage a part in EU negotiations, saying the tactic is not to give other parties “the oxygen of publicity”. Challenged if that meant no role at all for the Brexit Party leader, he replied: “It’s a pretty clear no ... absolutely not.”

Speaking before him at the same hustings, Jeremy Hunt, his opponent in the leadership race, took the opportunity to dismiss one of Mr Johnson’s ideas that the UK could negotiate a standstill agreement to prevent trade tariffs with the EU if it left with no deal under an international mechanism called the General Agreement on Tariffs and Trade (Gatt 24).

“I think we’ve got to knock this Gatt 24 thing on the head,” he said. “You can only get an agreement not to introduce tariffs if both sides agree to that.

“So there isn’t a no-deal route that would allow us to take advantage of Gatt 24.”

Mr Hunt said he would not accuse Mr Johnson of lying but said that his proposals were factually not possible.

Mr Hunt also ruled out an election before Brexit is sorted out and described Labour leader Jeremy Corbyn as a crocodile lurking beneath the water.

Earlier in a BBC interview, Mr Hunt described October 31st as a “fake deadline” for leaving the EU in a move that drew derision from Tory Eurosceptics. His allies said afterwards that he had meant to say Mr Johnson’s pledge to take the UK out of the EU by that date was a “fake promise” as it might not be deliverable.

Mr Johnson has repeatedly challenged Mr Hunt to commit to the same deadline but Mr Hunt has resisted on the grounds that it would not be sensible to rule out staying a bit longer if the UK were on the brink of a deal.

The hustings involved pre-vetted questions from the general public being read out to the candidates by a moderator one after the other.

Mr Hunt has been pushing for Johnson to face him in head-to-head television debates before ballot papers are sent out to Tory members. However, Mr Johnson has so far only agreed to one ITV event after this has happened, meaning many members will have cast their votes already by that point. – Guardian