UK to step up role in battle against Islamic State 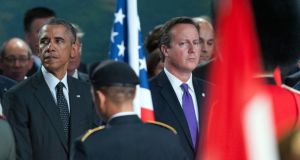 Speaking today at the Nato summit in Wales, Mr Cameron said he would “not rule out taking further action” against Islamic State, which is threatening to kill a British hostage.

Up to now, the British have supplied tents, body armour and helmets to the Kurds, but not weaponry - though the Royal Air Force did ferry Soviet-era equipment to the Peshmerga.

Now, however, No 10 Downing Street says supplies of British-made ammunition will flow in coming days - yet another step in the escalation of London’s involvement.

In a bid to create regional alliances for tackling Islamic State, Mr Cameron will meet this afternoon with Jordan’s King Abdullah for a bi-lateral at the Nato summit in Newport.

Ruling out co-operation with Syria because the Assad regime is “illegitimate”, Mr Cameron said that Western intervention could not be “over the heads of neighbouring states”.

In the House of Commons, Conservative whips have begun to guage whether there is support amongst MPs for military air-strikes - though Washington has not requested such support.

Questioned this month, Mr Cameron said he was “certainly not ruling anything out”, but he is wary of moving too far ahead of public opinion following his humiliation last year over bombing Syria.

London hopes that a new government could be in place in Baghdad by September 11th - which could open the way for an Iraqi invitation to London to help defeat Islamic State.

“The Iraqi government is a legitimate government. We believe it is about to become more legitimate with a new prime minister with the backing of all of his country,” said Mr Cameron.

Labour leader, Ed Miliband, who opposed the Syrian action last year, has given signals that he will take a different action this time: “(Islamic Stae) is a threat that can’t be ignored.

“I think it’s very, very important that we don’t just turn away from it and say it’s too big a problem,” he told Good Morning Scotland at the beginning of a day’s campaigning in the Scottish referendum.

Mr Cameron’s difficulties are heightened because Islamic State hold a British captive, David Haines, a 44-year-old father of two, who is said to have worked with a series of aid agencies over 20 years.

Mr Cameron has said that he is personally in charge of London’s handling of the kidnap crisis, but he sharply criticised countries that pay ransoms.

Ransoms paid have given groups like Islamic State “tens of millions of dollars that they can spend on kidnapping other hostages, on preparing terrorist plots,” he told ITV.

He rejected a call by Labour’s former Northern Ireland secretary Peter Hain to work alongside president Assad to defeat Islamic State, saying: “(He) is part of the problem not the solution.”