We asked Irish Times readers around the world to send in their video greetings for St. Patrick's Day. See if you spot someone you know. 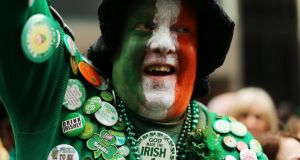 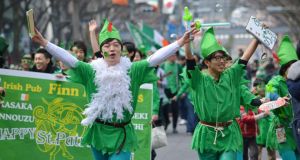 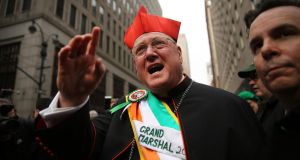 St Patrick’s day celebrations around the world have drawn thousands of revellers onto the streets, from New York and Boston to Sydney and Hong Kong.

As many as two million people lined Fifth Avenue in New York to watch the marching bands, majorettes and army veterans making up the annual St Patrick’s Day parade.

In true American style, the affair began with the thundering roar of Ford Mustang muscle cars, which quickly gave way to the New York National Guard’s 1st Battalion 69th Infantry - leading the parade as they have done since 1851 - and the thump and skirl of the first of dozens of pipe bands.

Cardinal Timothy Dolan, grand marshal of the parade, took up his position on the steps of St Patrick’s cathedral to greet the marchers.

“I’m as radiant as the sun, so thanks be to God for the honour and the joy,” said the Roman Catholic archbishop of New York.

His presence was seen as a blessing for the first openly homosexual group to join the parade following the controversy last year when sponsors pulled out and several leading city officials boycotted the event over the exclusion of gay groups.

It was enough to coax Guinness back as a sponsor, and the gay group’s presence caused barely a ripple among most of the spectators.

“It’s no big deal,” he said from his vantage point among the crowds at 55th Street. “Everyone should be allowed to march together.”

His words were echoed by many among the crowd, although one protester held a banner reading: “God is not mocked.”

Bill de Blasio, New York city mayor, stayed away for the second year running, saying the inclusion of a single such group was not enough.

But overall it made for just another addition to the eclectic mix of groups claiming Irish affiliation - from Japanese choirs and Argentinian bands to trades unions, Irish historical societies, and of course the huge contingent of New York police officers and firefighters with Celtic roots.

The boisterous crowd, many of whom ignored Taoiseach Enda Kenny’s advice to enjoy the day responsibly, fell silent only when 343 Stars and Stripes flags passed by, representing each of the firefighters who died on 9/11.

Rickard Falk, visiting New York from Sweden to watch ice hockey, said he had never seen anything like it.

Minister of State Dara Murphy led the St Patrick’s Day celebrations in Belgium, as part of a four-day programme of events in the Benelux country.

Events were taking place in the capital Brussels on Tuesday to mark the festival, culminating in the “greening” of the Grand Place in the evening.

This was to be the second year the medieval square and Unesco-World Heritage site has taken part in Tourism Ireland’s Global Greening initiative.

On Sunday, the traditional St Patrick’s Day Parade took place in Parc Cinquantenaire near the European Commission in Brussels, with the Brussels GAA club holding Gaelic games throughout the day.

This year also saw the traditional donning of a miniature Aran jumper by the ‘Manneken Pis’, the tiny 17th century statue located just off the Grand Place in Brussels.

Mr Murphy was also to visit the medieval Flemish town of Bruges, before hosting an evening St Patrick’s Day reception at Bozar, Brussels’s Museum of Fine Arts, being hosted jointly by Ireland’s Ambassador to Belgium and Ireland’s Permanent Representation to the European Union.

The Sydney St Patrick’s Day parade took place on March 15th with 80,000 people taking to the streets to enjoy the day’s festivities.

The parade included Aboriginal dancers, marchers from each of Ireland’s countries, schools of Irish dancers and a Father Ted float featuring “nuns” and “lovely girls”.

A tent was errected in the Australian city’s Hyde Park, where 61 Irish poeple became Australian citizens. There were also parades in Brisbane, Perth and an Irish festival in Melbourne.

The Sydney parade is reportedly the fourth largest parade in the world after New York, Dublin and Boston.

The London St Patrick’s Day parade, which was also held on Saturday, temporarily drew to a halt after the Imelda feminist performance group blocked a float from passing.

Dressed all in red and wearing bishops’ mitres, the pro-choice campaign group lined up in front of a giant model of St Patrick chanting “our bodies, our choice”, while shaking snakes.

Irish communities around the world were holding St Patrick’s Day celebrations over the past few days, with parades and festivies in states across the US including Nebraska, Montana, Ohio and Wisconsin and international celebrations in Japan, Canada and the West Indies.