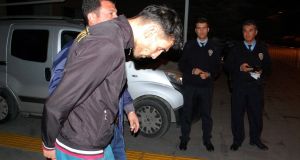 Ahmet Dahmani is escorted by a plain clothes police officer on Friday in Antalya. It is believed Dahmani scouted out the target sites for the attacks in Paris a week ago. Photograph: Ihlas News Agency/AFP/Getty Images

Turkey has arrested a Belgian man of Moroccan origin suspected of involvement in Islamic State’s attacks in Paris that killed 130 people a week ago, a Turkish government official said on Saturday.

Ahmet Dahmani (26) was arrested at a luxury hotel in the southern coastal city of Antalya after travelling from Amsterdam last Saturday, November 14th. Two suspected accomplices were also arrested, the official said.

Without citing its sources, Turkey’s Dogan news agency said Dahmani had scouted out the target sites for the Paris attacks, and that the two other men, both Syrian, were detained on suspicion of planning to help him cross safely into Syria.

“We believe that Dahmani was in contact with the terrorists who perpetrated the Paris attacks. The investigation continues,” the government official said.

The security forces arrested him because they believed he was an Islamic State militant preparing to illegally cross the Turkish-Syrian border, the official said.

The Belgian authorities had not warned Turkey about Dahmani and he was therefore not among the more than 26,000 names on a list of people, maintained by the Turkish authorities but largely based on foreign intelligence, banned from entering Turkey.

“Had the Belgian authorities alerted us in due time, Dahmani could have been apprehended at the airport,” the official said.

Turkey estimates that no more than 1,300 of its nationals are among the many thousands of foreign fighters to have joined the ranks of Islamic State, also known as Isis, in Syria, less than from some Western European countries, although some diplomats put the figure far higher.

But the group, which holds territory adjacent to the Turkish border in Syria, is trying to recruit more.

In a Turkish-language video released by Islamic State’s media arm AlHayat on Saturday, the group called on Turkish Muslims to move to the lands under its control, assuring them it is not dangerous there and that life is normal and prosperous.

Turkey has warned before of the threat from North Africa and deported a group of Moroccans detained at Istanbul’s main airport this week over suspected links to Islamic State.

The eight, who said they had arrived at Ataturk airport on Tuesday night from Casablanca for a holiday, were detained by border police and questioned by profiling experts who flagged them as suspected militants, a government official said.