Toronto mayor drops out of election due to tumour diagnosis

Mayor undergoing tests, with biopsy results expected in a week 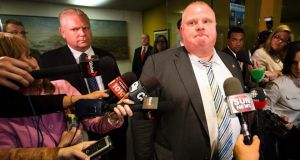 Toronto mayor Rob Ford: dropped out of race for re-election as mayor today after he was diagnosed with an abdominal tumour this week. Photograph: Reuters/Mark Blinch

Toronto mayor Rob Ford, who gained global notoriety for admitting he smoked crack cocaine, dropped out of the race for re-election as mayor yesterday, after he was diagnosed with an abdominal tumour this week.

A city clerk told reporters Mr Ford’s nomination had been withdrawn six weeks before the election, just ahead of a deadline for ballot changes to the October 27th election.

He was hospitalised on Wednesday after complaining of abdominal pains and was diagnosed with a tumour. He is undergoing tests, with biopsy results expected in a week. “He is in for the fight of his life,” councillor Doug Ford told the Toronto Sun newspaper.

Doug Ford, the mayor’s older brother and campaign manager, said he would follow his brother’s wishes.

“I would jump off a bridge for the guy,” he was quoted as saying by the Toronto Sun.

Rob Ford’s politician father died of colon cancer less than three months after being diagnosed in 2006. In 2009, doctors removed a tumour from Rob Ford’s appendix and the then-city councillor returned to work.