Paris attacker who killed one was flagged as security risk

An assailant shouting "Allahu akbar" killed a passer-by in a knife attack that also wounded four others in the heart of Paris late on Saturday night before he was shot dead by police. Video: Reuters 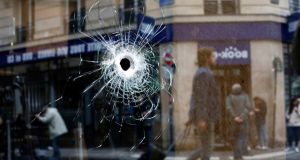 A bullet hole in the window of a cafe located near the area where a knife attacker was shot dead by police officers in central Paris on Saturday. Photograph: Thibault Camus/AP Photo

A knife-wielding attacker who killed a passerby and injured four others in Paris on Saturday evening had been flagged as a security risk and interviewed by counter-terrorist police.

French police took the man’s parents and a one of his friends into custody on Sunday for questioning about his links to jihadists in Syria.

The attacker, named as Khamzat Azimov, was born in Chechnya but reportedly obtained French nationality in 2010. There were conflicting reports on his age. He struck at random in the busy area of restaurants and theatres near Paris’s Opera Garnier in the city’s second arrondissement at about 8.50pm local time.

Police were quickly on the scene as the knifeman walked from restaurant to restaurant on rue Monsigny, a one-way street, apparently looking for victims. Panicked diners fled terraces or took refuge under tables inside.

Officers, praised for their sang-froid, reportedly tried to halt him with a stun-gun, but when he continued to threaten them they shot him dead.

Witnesses said Azimov shouted: “Go ahead. Shoot. I’m going to get you.”

In the moments before, he stabbed to death a 29-year-old man walking in the street and injured four others. Two of the injured were said to be in a serious condition in hospital, but their lives were not under threat.

Several witnesses claimed the attacker cried “Allahu Akbar” as he lunged at people. This was confirmed by the public prosecutor, Francois Molins. Isis has claimed responsibility for the attack.

Azimov, who was not carrying identity papers, had been interviewed by counter-terrorism officers “several months ago” after it was discovered he was friends with a man whose wife had travelled to Syria, and was on the Fiche-S list of people considered a potential security risk. He had no criminal record.

In a series of tweets, French president Emmanuel Macron said his thoughts were with the victims of the attack and praised the courage of police who “neutralised the terrorist”.

“France is paying in blood once again, but it will not give one inch to the enemies of freedom,” he wrote.

The interior minister, Gerard Collomb, hailed the “sang-froid” and quick response of police who shot the attacker. “My first thoughts are with the victims of this odious act,” he tweeted.

Another woman who was out with her young son and saw the suspect said he seemed determined to attack police officers who had tried to surround and immobilise him.

“Police made a barrage around him and I really thought that would stop him, but not at all. He literally jumped at the police. He was so determined,” she told BFM TV.

She added: “He was small slim, longish hair, like all the fashionable young, a three-day beard. He did not stand out. He was dressed normally. Never in my life would I have thought he was going to attack.”

A waiter on duty near the opera house, named only as Jonathan, described the attack, which happened in front of his restaurant.

He added: “He threatened a woman and her companion came to defend her and was threatened as well. Then he moved on to the next restaurant and attacked it. I wasn’t particularly worried, I was under the impression he was mad or drugged up.”

On Sunday, while Mr Macron and his wife Brigitte were taking a bank-holiday break at Fort de Brégancon in the south of France, Mr Collomb held an hour-long emergency security meeting with representatives of the security services, police and advisers at the interior ministry.

France’s anti-terrorist brigade was investigating the attack and the prosecutor has opened an inquiry into “murder linked to a terrorist organisation”. – Guardian