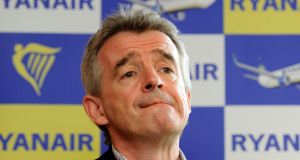 Michael O’Leary: The group’s reputation for the shadowy exercise of power is at odds with his brash public image. Photograph: Dave Meehan

Ryanair chief Michael O’Leary has never hidden his plans for world domination but his nomination to a secretive group said to truly govern world affairs may bring him one step closer to his goal.

The group’s reputation for the shadowy exercise of power is at odds with Mr O’Leary’s brash public image.

His biography on Ryanair’s website states: “Born, at Christmas, in a stable in 1961, he was a boy genius, who excelled both academically and in sports. Having represented Ireland at bog snorkelling and flower arranging, he graduated from Trinity College in Dublin as soon as they could get rid of him.”

The Bilderberg group, named after the Dutch hotel in which its first meeting was held in 1954, has long been the subject of conspiracy theories for providing a nexus between ultra-rich business figures and political leaders.

Its annual meeting, usually in a luxurious hotel, aspires to foster dialogue between Europe and North America.

There was a curt no comment from Ryanair on suggestions that Mr O’Leary has been nominated to Bilderberg’s committee, whose chairman is Henri de Castries, chief of the Axa insurance empire.