Irish men who fought are commemorated for first time 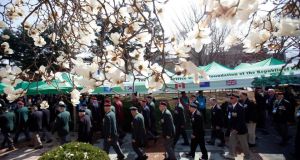 Veterans march during a ceremony to commemorate the 62nd anniversary of the battle of Gapyeong during the Korean War. Photograph: Kim Hong-Ji/Reuters 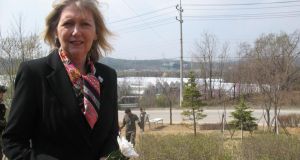 Lynne Ross, whose father was killed in 1951 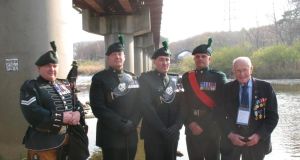 Standing on a low hill, Lynne Ross (63) gazed out over a peaceful, rural scene: a broad valley, its floor shimmering with greenhouses in spring sunshine northwest of Seoul.

Tears welled behind her sunglasses. Ross was looking upon the battlefield where the father she never knew, Edward “Ted” Wheeler, a soldier in the British army’s Royal Ulster Rifles (RUR), was killed in 1951.

With Irish irony, that desperate battle was dubbed “Happy Valley”. Joining Ross were 11 Irish veterans, mostly in their 80s, and serving soldiers from the Royal Irish Regiment.

All were commemorating – for the first time – the Irish role in a forgotten war.

Ireland did not join the UN force that defended South Korea from 1950 to 1953. However, uncounted Irish men from both sides of the Border fought, mainly in British units – who suffered more deaths in Korea than in the Falklands, Iraq and Afghanistan combined – but also in Commonwealth and US uniforms.


Reappraised role
The reappraised Irish role, and the visit to the area by Ross and the veterans, owes much to recent Anglo-Irish reconciliation.

“A key dimension has been the Irish peace process, as after the Good Friday agreement of 1998 most identities and traditions were accepted as part of the shared island of Ireland,” said Irish Ambassador to Korea Eamonn McKee.

“There has been a recovery of many facets of what it means to be Irish, and this includes Irish service in the British military.”

Still, McKee added that research was needed to discover how many Irish men and men of Irish descent fought in Korea.

During their week-long trip, the veterans and serving soldiers laid a wreath on the key RUR position at Imjin river, one of the war’s biggest battles.

A monument to the Irish dead of the Korean War – not just soldiers, but also seven Columban priests and a nun killed by North Koreans – was also unveiled at central Seoul’s huge war memorial.

The veterans’ visit sparked harrowing memories of a war that claimed more than two million lives. “The enemy were very stubborn, they had practically sworn their own death warrants,” said Michael Kelly (84), a Galway man who served in the US army.

“The worst thing was the fear: usually they’d attack at night.”

“The worst thing was the refugees, women and children caught up in the firing,” recalled Paddy Redmond (89), who fought in the Middlesex Regiment. “Their homes and villages were destroyed for no other reason than they were in the way.”

Captured
Henry O’Kane (83), who lives in England, was captured at Imjin river. Hit by friendly fire, he climbed on to a tank in a valley swarming with the enemy. The tank swerved; O’Kane was thrown off and captured. “We thought we were gone,” he said.

He and fellow captives smoked all their cigarettes, anticipating execution. Instead, they were marched to North Korean prisoner-of-war camps.

For the Irish units – the RUR and the 8th King’s Royal Irish Hussars – the bloodiest battlefield was Happy Valley. Here, on January 3rd to 4th, 1951, the Irish held a key ridgeline against China’s “human wave” while other UN troops retreated through Seoul.

As they themselves withdrew after dark, the Irish were mistakenly illuminated by UN aircraft. Chinese, on ridges above, charged down.

The battle became a melee. Men fought down the snow-covered valley, past an ambush beside a rail bridge and through a burning village. Belfast man Spencer McWhirter (81) recalled stumbling over bodies in the darkness.

The Hussars lost 10 tanks; the RUR lost 157 men; the commanders of both units were among the dead. Seoul was abandoned to the Chinese.

Yet their sacrifice was not in vain. The stand bought time for Seoul’s evacuation. “This was the last defence line before Seoul,” said Kim Chang-won, a local historian. “This rearguard action allowed thousands of citizens to withdraw.”


Moving ceremony
In a sombre ceremony held by South Korea’s 36th Mechanised Division on Wednesday, the 1951 veterans were honoured. A granite memorial to Happy Valley stands outside Belfast City Hall, and there are plans to put a replica on the battlefield.

“It was dreadfully moving, I was very touched,” said Ross after the service.

Her late mother had always wanted to make the trip but never did. “I at least know what the battlefield looks like. To be able to put that into context was very comforting.”

The Irish veterans – joining an annual visit of British and Commonwealth veterans – were treated like celebrities by South Koreans. And viewing the economic development of the once-devastated nation, all veterans agreed that the war was justified.

“It’s stupendous, the go-ahead of these people,” said Albert Morrow (85) from Co Down. “When you see this, it was worthwhile.”

“I am not sure if any wars are ever just, but when I look and see how they have allowed South Korea to flourish, free from communism, I think this one was,” said Ross, who lives in Glasgow.

Her trip, she added, had been emotionally draining – but she had achieved closure.