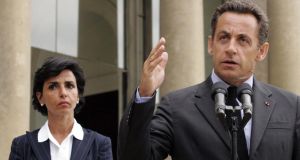 Nicolas Sarkozy with Rachida Dati at the Élysée Palace in Paris in 2007. Photograph: Benoit Tessier/Reuters

Like her political mentor Nicolas Sarkozy, Rachida Dati is a tough survivor with a chip on her shoulder, a fighter whose scrappiness sometimes works against her.

Dati was spokesperson for Sarkozy’s 2007 presidential campaign, then served as his minister of justice. At Sarkozy’s suggestion, she became mayor of Paris’s seventh arrondissement. After losing an ugly battle with former prime minister François Fillon for a Paris deputy’s seat, she was elected to the European parliament.

Sarkozy is virtually certain to be elected president of the conservative UMP next Saturday. He intends to use the post as a springboard for regaining the presidency of France in 2017. “I say it very clearly,” Dati told the European Press Club. “Nicolas Sarkozy is the one for me. We have to resurrect this party.”

The French right is notorious for vicious infighting. On November 22nd, Sarkozy stood back and allowed his supporters to boo Alain Juppé at a rally in Bordeaux, where Juppé is mayor. Though Juppé is not a contender for the party leadership, he is Sarkozy’s main rival for the UMP’s 2017 presidential nomination.

Dati is about to lead a delegation of MEPs to the US-run prison at Guantánamo. Asked if her colleagues in the UMP would prefer she stayed there, she replied: “It is certainly an extremely violent, brutal milieu.”

Dati turned on Christine Clerc, a well-known journalist who last year published a book on prominent French women politicians, and who was sitting a few tables away.

Other female UMP politicians were considered “exceptional” by Clerc, Dati said. “And I was portrayed as Zola’s Nana [the fictional courtesan]. I’ve been defending women for 20 years and she portrayed me as a woman who pulled up her skirts to succeed.”

Dati wears her background – illiterate Algerian immigrant parents, education by Carmelite nuns, a brief, arranged marriage and single motherhood – like a badge of honour. “It’s true we’re not from the same milieu,” she said, referring to Clerc. Other grievances surfaced in the course of the lunch. Dati accuses associates of Fillon of having placed photographs of her labelled “dirty Arab”, “dirty whore” and “Don’t vote for the mother of the bastard” outside her five-year-old daughter Zohra’s school.

Sarkozy’s opponents expressed shock he did not react when his supporters booed Juppé, an incident widely portrayed as round one in their war of nerves. Sarkozy supporters say Juppé, who’s a decade older than Sarkozy, will not stay the course.

“Juppé was in his home town,” Dati says in Sarkozy’s defence. “The rally was organised by his troops . . . I thought it was very good – not that Juppé was booed – but that the militants said ‘We’ve had it. You have to listen to us.’”

Juppé apparently offended Sarkozy’s supporters by evoking “the large gathering of the right and centre that should be the UMP”. Dati says UMP voters aren’t ready to merge with the centre-right, who are European federalists, and whose most popular leader, François Bayrou, supported François Hollande in 2012. Yet Sarkozy too wants to unite the UMP with smaller centre-right parties.

Days before it elects its leader, the UMP is riddled with disagreement: on changing its name, on immigration and relations with the extreme right-wing National Front. There is friction over plans for a primary in 2016.

Dati says a primary would be alien to the right’s “tradition” and has become “a process of elimination” which results in internecine struggle and the nomination of “the lowest common denominator” when “what we need is a strong person with a strong programme and a strong vision” ie Sarkozy.

Sarkozy led the UMP before, from 2004 until 2007. He was elected by 85 per cent of its members. “He cannot get 85 per cent this time,” Dati says. “Since 2004, he’s been president of the republic. He was defeated. There was a horrific war between [last UMP president Jean- François] Copé and Fillon which left wounds that have not healed, as we saw with the booing in Bordeaux . . . I am the only one who says that. Everyone else dreams of a Soviet score for Sarkozy.”