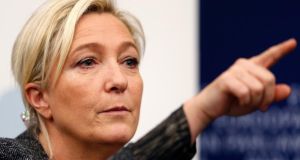 Marine Le Pen: 56 per cent of those surveyed said she “understands the daily problems of the French” . Photograph: Reuters/Vincent Kessler


A record 34 per cent of French people now agree with the ideas of Marine Le Pen’s far-right National Front (FN), according to the annual TNS-Sofres barometer, published this week.

Acceptance of the FN has zigzagged dramatically since the poll was launched in 1984 to assess acceptance of the party, which was founded by Jean-Marie Le Pen in 1972. But approval of the Front’s ideas has risen steadily since his daughter Marine took over the party, from 22 per cent in 2011 to 31 per cent the following year, 32 per cent last year and 34 per cent at present.

Fifty-eight per cent of respondents believe Ms Le Pen is “capable of rallying support beyond her camp”, while 56 per cent said she “understands the daily problems of the French”.


‘Patriotic right’
Last year, for the first time, more respondents judged Ms Le Pen to be “representative of the patriotic right which feels an attachment for traditional values” than believed she represented “the nationalistic, xenophobic extreme right”.

Some 46 per cent now classify her as “patriotic” and “traditional”, compared to 43 per cent who find her “nationalistic” and “xenophobic”.

There is, however, what Le Monde calls “the Marine Le Pen paradox”.

Ms Le Pen is more popular than her party, which one in two French people still believe “represents a danger for democracy in France”.

There is speculation that Ms Le Pen might change the name of the National Front, perhaps by merging it with the “Rassemblement Bleu Marine” umbrella group of small far-right parties that she established in 2012.

Although an ever-growing number of French people agree with Ms Le Pen’s priorities, fewer believe she can provide credible remedies to France’s problems; 35 per cent said they agreed with her criticisms but not with her solutions.

Two of Ms Le Pen’s main positions are rejected massively. Her goal of withdrawing from the euro and returning to the franc is shared by 29 per cent, but disavowed by 64 per cent. Advocacy of a “national priority” that would favour French citizens over immigrants for housing and employment is supported by 24 per cent and refused by 72 per cent.

Support runs high for many elements of the FN’s programme, including the idea that the French “no longer feel at home in France”, the desire for “the defence of traditional values,” a stronger police force and a “more severe” justice system.

Acceptance of the FN is particularly high among supporters of the mainstream conservative UMP, the political descendents of Charles de Gaulle.

Fifty-three per cent of UMP supporters say Ms Le Pen represents the “patriotic right”; 44 per cent agree with the FN’s ideas and 40 per cent would like the UMP to strike electoral alliances with the FN in next month’s municipal elections. Ms Le Pen’s aim is to eventually overtake the UMP as the leading right-wing party. Some 75 per cent of FN supporters say they would like to achieve a “national accord” with the UMP.


Credibility on issues
The Institut Médiascopie carried out a study on “the words of Marine Le Pen” which asked respondents to rate vocabulary used most frequently by the FN leader, in terms of their own priorities and according to her credibility on the issues.

Of 180 words and subjects favoured by Ms Le Pen, 124, or 69 per cent, were considered high priority by respondents.

“The themes adopted by the president of the FN are in the air du temps and in touch with numerous questions posed in society,” the political scientists Denis Muzet and Pascal Perrineau wrote in their analysis.

The FN, citing what it called “the positive result” of the Swiss vote to severely limit immigration, this week launched a petition to demand a similar referendum in France.