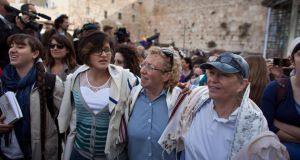 Members of the religious group Women of the Wall, during a prayer marking the first day of the Jewish month of Iyar at the Western Wall in Jerusalem’s Old City, Israel. Photograph: Getty


Police have arrested five women who donned Jewish prayer shawls, traditionally worn only by men, at the Western Wall in Jerusalem’s old city, one of Judaism’s holiest sites.

Some 120 feminists from Women of the Wall, connected to the liberal reform and conservative branches of Judaism, popular abroad but negligible in Israel, gathered at the Western Wall – a relic of the Biblical Temple compound – to celebrate the start of the new Jewish month.

Police moved in to make the arrests after some of the women defied a court order banning them from wearing prayer shawls at the site or reading from the Torah. Police also arrested an ultra-Orthodox man for burning a pamphlet distributed by the women, and a woman for hurling abuse at the worshippers.

The Jerusalem magistrate’s court ordered the women to be released saying any disruption that took place was not instigated by the defendants.

Judge Sharon Lary-Bavly said during the proceedings that “to arrest these women … is like blaming a rape victim for the clothing that she wears.”

“Their goal is to cause dispute and hurt feelings by increasing polarisation and turning the Western Wall into a battlefield for zealots.”

Ever since 1967, when Israel captured Jerusalem’s old city from Jordan in the Six-Day war, the Western Wall plaza has operated as an orthodox synagogue with strict separation of the sexes. The Women of the Wall’s monthly prayers often end with arrests of women who don prayer shawls or read publicly from the holy scriptures, a rite also reserved under Orthodox ritual for men.

The protests have caused tension with diaspora Jewry, particularly the powerful American Jewish community where reform and conservative branches, which favour egalitarian services, are a majority.

Prime minister Binyamin Netanyahu is considering a proposal drawn up by Natan Sharansky, the head of the Jewish Agency, which has garnered wide support from most of the involved parties.

The plan calls for area running along the wall to be divided into three equal parts – male, female, and egalitarian. “One Western Wall for one Jewish people,” said Mr Sharansky, expressing hope that the site “will once again be a symbol of unity among the Jewish people.”