US, Britain and Russia send warships 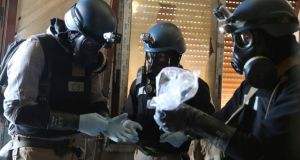 A UN chemical weapons expert, wearing a gas mask, holds a plastic bag yesterday containing samples from one of the sites of an alleged chemical weapons attack in the Ain Tarma neighbourhood of Damascus. Photograph: Mohamed Abdullah/Reuters

UN experts completed a third day of inspections in the eastern Ghouta region near Damascus yesterday, seeking evidence of chemical weapons attacks, as Syrian president Bashar al-Assad said Syria would defend itself against any attacks and US, British and Russian warships sailed towards the Levant shore.

UN secretary general Ban Ki-moon announced the UN team would complete its work today and depart tomorrow, a day earlier than scheduled, and report to him about their findings. The experts have not conducted investigations into alleged chemical attacks last December and March, their original mission.

Russian foreign ministry spokesman Alexander Lukashevich responded by saying the team should remain in the country and inspect three other sites, including a suburb of Aleppo, where the government said troops encountered chemical weapons used by rebel or fundamentalist forces between August 22nd and 25th.

The focus of yesterday’s investigations – involving the collection of bodily fluids from victims and trace evidence on the ground – was Zamalka, the small town that suffered most casualties from the early-morning strikes on August 21st in which hundreds were killed.

Assad response
With western powers contemplating military action against Syria in response to last week’s attacks, Bashar al-Assad said his country would defend itself against any attacks.

The Syrian president’s comments, from a meeting with a delegation from Yemen, were reported by the state news agency Sana. “Threats to launch a direct aggression against Syria will make it more adherent to its well-established principles and sovereign decisions stemming from the will of its people, and Syria will defend itself against any aggression,” he said .

Separately, it was reported that military personnel had been evacuated from command-and-control centres in Damascus and research facilities in the capital’s suburbs. An official said the military was “working [on the basis of] worst-case scenarios [and] taking measures to protect the country and preparing for an adequate response”.

The International Committee of the Red Cross (ICRC) warned that the conflict had reached “unprecedented levels” and showed no sign of abating. The organisation’s delegate in Syria, Magne Barth, stated, “Further escalation will likely trigger more displacement and add to humanitarian needs, which are already immense.

“There are acute shortages of vital medical supplies, food and water in . . . areas . . . sealed off for months and to which the ICRC and the Syrian Arab Red Crescent have not been given access.”

It is likely that Russia and China will oppose any resolution mandating western military action. While rejecting the use of chemical weapons in in Syria, Russian president Vladimir Putin and his Iranian counterpart Hassan Rouhani called for a political solution to the Syrian conflict.

Chinese foreign minister Wang Yi said that “any foreign military intervention [in Syria] will contradict the UN charter” and may “spread chaos in the Middle East”.

Dialogue
In Rome, Pope Francis and the visiting king of Jordan said dialogue was the “only option” to bring an end to the conflict.

After condemning the use of chemical weapons by any side in Syria, Egypt’s foreign minister Nabil Fahmy said his country strongly opposed western military action and asked the international community to prosecute perpetrators once the UN team issued its findings.

Lebanon’s Hizbullah movement, an ally of the Syrian regime, said it might retaliate if Syria was attacked.