US and Russia push for rapid talks to end Syria carnage 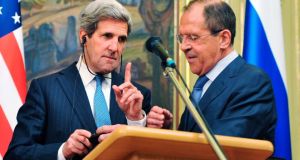 US secretary of state John Kerry (left) gestures as Russian foreign minister Sergei Lavrov tries to fix his translation equipment during a joint news conference after their meeting in Moscow yesterday. Russia and the United States have agreed to try to arrange an international conference this month on ending the civil war in Syria, and said both sides in the conflict should take part. Photograph: Mladen Antonov/Reuters

Russia and the United States agreed to bury their differences over Syria and to try to convene international talks with both sides in the civil war to end the carnage that is inflaming the Middle East.

Visiting Moscow after Israel bombed targets near Damascus and as president Barack Obama faces new calls to arm the rebels, US Secretary of State John Kerry said Russia had agreed to try to arrange a conference as early as this month involving both president Bashar al-Assad’s government and his opponents.

An East-West disagreement that has seen some of the frostiest exchanges between Washington and Moscow since the Cold War has deadlocked UN efforts to settle the Syrian conflict for two years, so any rapprochement could bring an international common front closer than it has been for many months.

But with Syria’s factional and sectarian hatreds more entrenched than ever after 70,000 deaths, it is far from clear the warring parties are ready to negotiate. There was no immediate comment from the Syrian government, which has offered reforms but dismisses those fighting it as terrorists.

The late hour of the announcement in Moscow - Kerry was kept waiting for three hours by president Vladimir Putin - also meant leaders of the Western-backed opposition umbrella group the Syrian National Coalition were not available for comment. Many on the body have insisted Assad’s exit is a condition for talks.

Inside the country, where rebel groups are numerous and have disparate views, a military commander in the north, Abdeljabbar al-Oqaidi, told Reuters he would want to know details of the US-Russian plan before taking a view. “But,” he added, “if the regime were present, I do not believe we would want to attend.”

Alarmed at the prospect of the conflict spilling across an already volatile and economically important region, however, the major powers have, as Mr Kerry told Mr Putin yesterday, “very significant common interests” in pushing for a settlement.

“The alternative,” Mr Kerry later told a joint news conference with Russian foreign minister Sergei Lavrov, “is that Syria heads closer to an abyss, if not over the abyss and into chaos.

Last year at a conference in Geneva in June, Washington and Moscow agreed on the need for a transitional government in Syria but left open the question of what would happen to Dr Assad, whose departure Mr Obama has called for but which Russia, accusing the West of meddling, says should be a matter for Syrians only.

Rejecting a characterisation of Moscow as the protector of Dr Assad, to whose army it has been a major arms suppliers since the days of his father’s rule, Mr Lavrov said Russia was not concerned by the fate of “certain” individuals.

“The task now is to convince the government and all the opposition groups ... to sit at the negotiating table,” he said.

Mr Kerry said the conference should be held “as soon as is practical - possibly and hopefully by the end of the month”. Neither he nor Mr Lavrov said where it might take place.

Mr Kerry said there would be “a growing crescendo of nations who will want to push for a peaceful resolution, rather than the chaos that comes with the break-up of a country”.

Mr Kerry said the decision on who takes part in any transitional government should be left to the Syrians.

Mr Lavrov said the aim would be “to persuade the government and the opposition together ... to fully implement the Geneva communique” on creating a transitional government.

Russia, backed by China which shares its mistrust of Western enthusiasm for toppling some autocrats, has refused appeals to consider sanctions on Mr Assad, vetoing three UN Security Council resolutions condemning his crackdown on opposition groups.

Recent developments have helped focus minds on the risks of wider war in the Middle East.

The White House said last month that Dr Assad’s troops had probably used chemical weapons - which Western governments have called a “red line” that would mandate tougher action. The Syrian government and the rebels have each accused the other of using poison gas, which both deny.

Islamist fighters have pledged allegiance to al-Qaeda, highlighting the risk to the West that a poorly managed change of power in Syria could bring its enemies to power.

And in recent days, Israeli air strikes - which Israeli officials suggested targeted Iranian arms headed for Assad’s Lebanese allies Hizbullah - underlined the risk of escalation and cross-border conflict in the heart of the Middle East.

Diplomatic sources in Moscow made clear the latest push for peace was being driven by growing alarm following the Israeli air raids, the possibility of foreign arms pouring into Syria and the possible use of chemical weapons.

Moscow and Washington have also signalled they want to improve cooperation on security matters since the Boston Marathon bombings, which US officials suspect was carried out by two ethnic Chechens who used to live in Russia.

“The world has to realise that it is dangerous to support extremism, as the events in Boston show,” one diplomatic source said. “To say we are not carrying out diplomatic activities to prevent terrorists being armed would be incorrect.”

US officials said FBI chief Robert Mueller had been in Moscow yesterday to discuss the bombings, but gave no details.

In a further sign of Washington’s efforts to improve ties with Russia, Kerry avoided any sharp public criticism of Moscow’s human rights record when he met civil rights activists in the Russian capital on Wednesday before his departure.

In what appeared to be another sign of Syria’s travails, Internet connections between Syria and the outside world were cut off on Tuesday, according to data from Google Inc and other global Internet companies.

Google’s Transparency Report pages showed traffic to Google services pages from Syria suddenly stopping shortly before 3 p.m. EDT (1900 GMT). Most websites within Syria were rendered unreachable as well, other experts said, as the county appeared to shut itself off.

Speaking before the announcement in Moscow, Dr Assad was quoted by a sympathetic Lebanese television channel as saying he would defy Israel, the United States and Arab powers who oppose him.

“The recent Israeli aggressions expose the extent of the complicity between the Israeli occupier, regional countries and the West in promoting the current events in Syria,” he said.

“The Syrian people and their heroic army ... are capable of confronting this Israeli adventure, which represents one of the faces of terrorism that is targeting Syria every day.”

While showing little desire to embroil US forces in Syria after winding down engagements in Iraq and Afghanistan, Mr Obama has rejected criticism that he might back out of a commitment to act if Dr Assad crossed the “red line” of using chemical weapons.

Yesterday, he pointed to the killing of Osama bin Laden and the toppling of Libyan leader Muammar Gaddafi, brought down by a US-backed rebellion, as evidence that “we typically follow through on our commitments”.

Syria is not part of an international treaty that bans poison gas but has said it would never use chemical weapons in an internal conflict. The rebels say they have no access to chemical weapons. Obama has said intelligence agencies believe Dr Assad’s forces probably used chemicals but that the evidence is not entirely conclusive.

The chaos in Syria, where a fifth of the 25 million population has been driven from their homes, was underlined by the latest incident of rebels taking UN peacekeepers hostage on the ceasefire line with the Israeli-occupied Golan Heights.

UN Secretary-General Ban Ki-moon strongly condemned the incident and called for the four Filipinos’ immediate release. They were detained as they patrolled close to an area where 21 Filipino observers were held for three days in March.

The Yarmouk Martyrs Brigade said the peacekeepers were seized for their own safety during clashes in the area.

More widely, the violence has inflamed a confrontation between Iran and its fellow Shia Muslim allies like Hizbullah, and the Sunni Arab powers, including US ally Saudi Arabia, who back the rebels.

Iran warned of unforeseeable consequences if Assad were toppled and said only a political settlement to Syria’s civil war would avoid a regional conflagration.

“God forbid, if there is any vacuum in Syria, these negative consequences will affect all countries,” foreign minister Ali Akbar Salehi said in Jordan. “No one knows what will happen.”