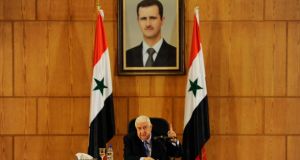 Syria’s foreign minister Walid al-Moualem speaks during a news conference in Damascus yesterday, confirming it would co-operate in any international efforts to fight Islamic State militants in the country. Photograph: Omar Sanadiki/Reuters

The United Nations yesterday condemned “appalling, widespread” crimes by Islamic State forces in Iraq, including mass executions of prisoners that could amount to war crimes.

UN human rights chief Navi Pillay condemned “grave, horrific human rights violations” being committed by Islamic State, a Sunni Muslim group formerly known as Isis or Isil, which has seized large areas of Iraq and Syria to the alarm of the Baghdad government and its allies in the West.

Up to 670 prisoners from Badush prison in the city of Mosul were killed by Islamic State on June 10th , Ms Pillay said, quoting survivors and witnesses to the “massacre” as telling UN human rights investigators.

“Such cold-blooded, systematic and intentional killings of civilians, after singling them out for their religious affiliation, may amount to war crimes and crimes against humanity,” Ms Pillay said. Islamic State loaded 1,000 to 1,500 prisoners from the jail on to trucks and took them for screening, she said. Sunni inmates were then separated and removed.

“Isil gunmen then yelled insults at the remaining prisoners, lined them up in four rows, ordered them to kneel and opened fire,” she said.

An Islamic State video last week depicting the beheading of American journalist James Foley prompted revulsion in the West and calls for tougher action against the jihadists, including taking the fight to them in Syria as well as Iraq.

Some experts have suggested that attacking Islamic State in Syria should involve coming to some sort of arrangement with the government of President Bashar al-Assad, seen in the West as a pariah since an uprising against him began three years ago.

Syria said it would co-operate in any international efforts to fight Islamic State in the country, after Washington signalled it was considering extending the battle against the militants into Syrian territory.

Foreign minister Walid al-Moualem presented his country as a vital partner in the war against Islamic State.

“Syria, geographically and operationally, is the centre of the international coalition to fight Islamic State,” Moualem said in a televised news conference. “States must come to it if they are serious in combating terrorism,” he added.

Asked about the prospect of US air strikes against Islamic State in Syria, Mr Moualem said his government was ready to co-operate with any country fighting militants. But air raids without Damascus’s approval would be seen as hostile acts.

While the White House indicated last week that it was considering taking on Islamic State in Syria, Washington has also supported the insurgency against Dr Assad and there has been no sign of any shift in US policy towards him.

Germany said yesterday it had had no diplomatic contacts with the Assad government and had no plans to re-establish them.Russia, Syria’s major ally, urged Western and Arab governments to overcome their distaste for Dr Assad and engage with him to fight Islamic State insurgents. “I think western politicians are already realising the growing and fast-spreading threat of terrorism,” foreign minister Sergei Lavrov said. The growing perception that Islamic State represents a threat to the region and beyond has shaken old alliances and enmities. – (Reuters)