The West bears some responsibility for rise of fundamentalism across region 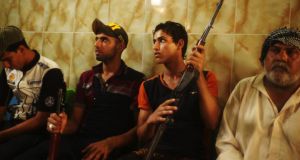 The cross-border conflict waged by the radical Islamic State in Iraq and Syria (Isis) is blowback from a policy of promoting fundamentalists that has been adopted for more than half a century by western powers and their regional allies as a counterweight to secular Arab nationalism.

Secular nationalism is the force that liberated most of the Arab world from British and French colonial rule. In most Muslim countries there were both secular and fundamentalist liberation movements but, in all the states, secular nationalists won the freedom struggle and took power.

The West has been antagonistic towards them not only because they opted for independence but also non-alignment during the cold war. They also adopted a strong stance against Israel, the creation and ally of the West. Presidents Gamal Abdel Nasser of Egypt, Hafez al-Assad of Syria (and now his son Bashar), Saddam Hussein of Iraq and Ali Abdullah Saleh of Yemen, as well as Palestinian leader Yasser Araf- at, were demonised as the We- st’s chief regional antagonists.

Unfortunately, these leaders and secular nationalism failed to deliver stability, good government or development, and exposed their regimes to domestic and external destabilisation.

The main beneficiaries of western hostility to secular nationalism have been the Egyptian Muslim Brotherhood, founded in 1928 under British rule, and radical jihadi groups like Isis.

The western promotion of fundamentalists was complemented by the Saudi policy of seeking converts for its deeply conservative religious ideology (Wahhabism) by building mosques, training clerics, and financing ultraorthodox Salafi factions and militias. The Saudis stepped up their efforts after Tehran tried to export its 1979 Shia “revolution” to the Arab world and the Soviet army occupied Afghanistan.

Following its 2003 invasion and occupation of Iraq, the US ensured exiled fundamentalist Shias took power. Washington’s argument was that Iraq’s Shia community, the country’s largest, was disadvantaged during the rule of the “Sunni regime” headed by Saddam Hussein. However, this was a mischaracterisation of his regime, which was not Sunni.

Hussein and his family were Sunni but the government was secular nationalist. The majority of ruling Baath Party members were Shias and the key ministries of oil, foreign affairs, defence and industry were headed by Shias.

Leading figures of the Syrian Sunni Muslim Brotherhood were granted refuge in western countries and have dominated organisations opposed to the Assad regime, including the internationally recognised Syrian National Council.

The Syrian regime is accused of being “Alawite”, dominated by the heterodox Shia sect that accounts for about 12 per cent of the population. This again is a mischaracterisation. The Assad family is Alawite but 68 per cent of positions in government are held by Sunnis, 20 per cent by Alawites, 7 per cent by Christians and 4 per cent by Druze. Sunnis also form the majority of members of the ruling Baath Party and soldiers in the army.

It would be ironic if the West now turns to secular nationalists as the alternative to fundamentalists, particularly the radicals on the march in Iraq and Syria who plan to expand across the region and elsewhere from their “Islamic emirate” in these countries.