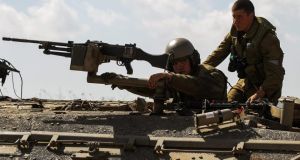 Israeli soldiers on top of a tank, taking positions near the village of Majdal Shams in the Golan Heights, on the Israeli-Syrian border yesterday. Photograph: EPA/Atef Safadi

Syria has warned that Israeli air strikes could destabilise the entire Middle East after attacks inside Syria yesterday left a soldier dead and seven wounded.

A Syrian army statement said the air strikes were a “desperate attempt to escalate and worsen the situation” and to divert attention from Damascus’s battlefront advances.

“Repeating such hostile acts would endanger the security and stability of the region and make it open to all possibilities,” said the statement.

The targets included a Syrian army training camp, an artillery battery and Syrian army headquarters in the Syrian Golan.

Irish forces
The 43rd Infantry Group of the Irish Defence Forces is deployed in the area as part of the Undof (United Nations Disengagement Observer Force) peacekeeping mission.

Israel captured the strategic plateau from Syria in the 1967 Arab-Israeli war, and thwarted a Syrian attempt to retake it in 1973.

The escalation marks the most serious cross-border violence since the Syrian civil war erupted three years ago and prompted fears of a wider conflagration on Israel’s northern border. Israel has used artillery against Syrian targets on the Golan in response to previous incidents, but until now refrained from air strikes.

Israeli prime minister Binyamin Netanyahu said Israel had targeted Syrian military facilities that had co-operated with the planting of the roadside bomb that injured the Israeli soldiers.


‘Clear policy’
“Our policy is very clear – we strike at those who strike at us,” Mr Netanyahu said.

“The Israel-Syria border is swarming with Hizbullah and jihad elements that pose a new challenge for Israel.Over the past few years we have been able to maintain a quiet border despite the civil war in Syria. We will act forcefully to maintain Israel’s security.”