Reports of explosions and gunfire as Afghan forces surround the campus, officials say 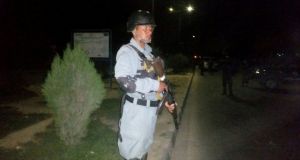 An Afghan policeman keeps watch at the site of an attack in Kabul, Afghanistan on Wednesday. Photograph: Omar Sobhani/Reuters

Gunmen attacked the American University of Afghanistan in Kabul on Wednesday, with explosions and gunfire reported inside the campus where foreign staff and hundreds of students were trapped, an interior ministry official and a student said.

Early reports were that several gunmen, some wearing suicide vests, were involved, he said.

“Several gunmen attacked the American University in Kabul and there are reports of gunfire and explosions,” the official said.

“They are inside the compound and there are foreign professors along with hundreds of students.”

“We are stuck inside our classroom and there are bursts of gunfire,” he said.

It is the second time this month that the university or its staff have been targeted.

Two teachers, an American and an Australian, remain missing after being abducted at gunpoint from a road nearby on August 7th.