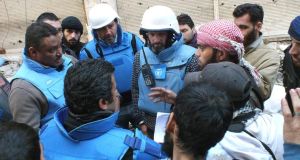 UN members talk with Sheikh Abu Harith al-Khalidi (right), who is in charge of negotiations for civilians inside the besieged area of Homs yesterday. Photograph: Reuters 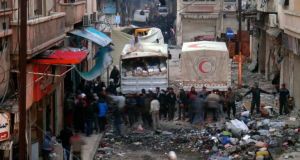 Six hundred people left the besieged ruins of rebel-held central Homs today, escaping more than a year of hunger and deprivation caused by one of the most protracted blockades of Syria’s devastating conflict.

The evacuees, mainly women, children and old men, were brought out by the United Nations and Syrian Red Crescent on the third day of an operation during which the aid convoys came under fire and were briefly trapped themselves in the city.

Video footage from inside Homs showed scores of residents, carrying a few bags of possesions, rushing across an open expanse of no-man’s land towards 10 white vehicles with UN markings. Gunshots could be heard as they raced to the cars. “The last vehicle has arrived and the total is 611 people,” Homs governor Talal Barazi told regional Arab broadcaster Al Mayadeen at a meeting point for evacuees outside the city.

The Red Crescent confirmed that around 600 people were evacuated and said 60 food parcels and more than a tonne of flour were delivered to the Old City. Barazi and Red Crescent officials said they were working to extend the operation beyond today, the final day of a fragile and frequently violated three-day ceasefire in the city.

Some of those who came out were men of fighting age who were not originally eligible to leave, Mr Barazi said, but they had agreed to hand themselves over to police and judicial authorities and could win their freedom through amnesty. Authorities suspect all men of fighting age to be part of rebel forces fighting to overthrow president Bashar al-Assad.

Assad’s authorities and rebel fighters have traded accusations of responsibility for attacks yesterday which stranded the joint United Nations and Red Crescent team in central Old Homs for several hours after dark on Saturday. The convoy was targeted as the relief workers were handing over food and medical supplies in the district where the United Nations says 2,500 people had been stranded by an ever-tightening military siege since the mid-2012.

The Red Crescent said one driver was lightly wounded but the rest of the team eventually left safely. Video footage released by activists showed the team, led by UN humanitarian co-ordinator in Syria Yacoub el Hillo, taking refuge on Saturday in a basement while explosions rocked the rubble-strewn, devastated streets above them. In another video filmed inside Homs yesterday, Mr Hillo said the aid supplies, including food parcels, medicines and hygiene kits, were just a drop in the ocean when set against the conditions endured by people trapped for months on end. “When I look around me and see the level of need, and suffering of all - especially the children, the women and the elderly - let me say that even though it’s a significant amount of medical and nutritional aid, it’s still just a drop,” he said. “But let’s start with this drop.”

On Friday, the first of the planned three-day humanitarian operation in Homs, 83 women, children and elderly men were evacuated, significantly fewer than the 200 which the city governor had predicted. Many showed signs of malnutrition, the United Nations said.