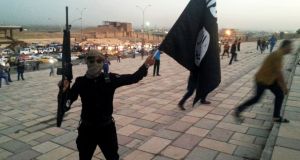 An Isis militant in the Iraqi city of Mosul. The terrorists are suspected of firing a mustard agent at US troops. Photograph: Reuters

Islamic State forces on Thursday fired a shell that may have contained a mustard agent onto a military base in northern Iraq used by US and Iraqi troops, CNN reported, citing several US officials.

No US troops were hurt or have displayed symptoms of exposure to a mustard agent.

One official said the agent had “low purity” and was “poorly weaponised,” CNN reported.

A second official called it “ineffective,” the network said.

Two field tests were conducted after the troops saw what they thought was a suspect substance. The first test came back positive but the second test was negative. – (Reuters)