Amateur video shows people gathering around what is said to be the wreckage of a downed Russian helicopter in Syria's Idlib. The Russian defence ministry said it had been shot down after delivering humanitarian aid to the city of Aleppo. Reuters 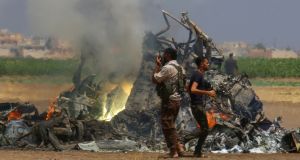 Men inspect the wreckage of a Russian helicopter that was shot down over Syria. Photograph: Ammar Abdullah/Reuters

A Russian transport helicopter has been shot down in Syria, killing all five people on board, a Kremlin spokesman said.

The Mi-8 helicopter was shot down in Idlib province while returning to the Russian air base on Syria’s coast after delivering humanitarian goods to the city of Aleppo, the defence ministry said.

The helicopter had three crew members and two officers deployed with the Russian centre at the Hemeimeem air base on board.

Dmitry Peskov, spokesman for Russian president Vladimir Putin, said that “from what we know from information provided by the defence ministry, all those who were on the helicopter died”.

He said the Russians “died heroically because they tried to move the aircraft away so as to minimise losses on the ground”.

Syrian rebel fighters had earlier launched a major assault on government-held southwestern parts of Aleppo to try to reopen supply lines after the army and its allies tightened their siege of opposition-held parts of the city last week.

The rebels are trying to break through the strip of government-controlled territory in the hope of reconnecting their encircled sector of eastern Aleppo with a swathe of insurgent territory in the west of Syria.

The army confirmed on state media that rebels had begun an offensive but said its fighters had pushed them back from an air force artillery base.

A quarter of a million civilians still live in Aleppo’s opposition-controlled eastern neighbourhoods, effectively under siege since the army, aided by Iranian-backed militias, cut off the last road into rebel districts in early July.

The army last week took significant ground on the northern edge of the city, around the Castello road, which leads north towards Turkey.

The British-based Syrian Observatory for Human Rights said the rebel assault was their biggest for several months.

The monitoring group, which tracks violence across Syria, said pro-government jets had bombed rebel-held Khan Touman in the southern countryside of Aleppo, and rebels had shelled government-held parts of central Aleppo overnight.

Aleppo, Syria’s biggest city before the outbreak of the conflict five years ago, has been divided between government forces and rebels since the summer of 2012.

Seizing full control would be the biggest victory for Syrian President Bashar al-Assad in five years of fighting, and demonstrate the dramatic shift of fortunes in his favour since Moscow joined the war on his side last year.

Assad’s government and its Russian allies declared a joint humanitarian operation for the besieged area on Thursday, bombarding it with leaflets telling fighters to surrender and civilians to leave.

But the United Nations raised misgivings about the plan and US officials suggested it might be an attempt to depopulate the city so that the army can seize it.