Pro-Israel lobby rallies behind Obama in support of strike 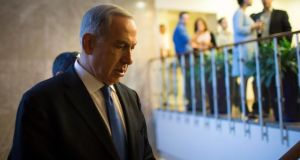 Israel Prime minister Binyamin Netanyahu responded positively to a direct request from Barack Obama in his battle to win a congressional majority on Syria. Photograph: Reuters

Israel, which has been careful not to take sides in Syria’s civil war, is now backing president Barack Obama’s campaign to win a majority for a military strike, causing concern among a number of officials that Israel may be blamed in some quarters for dragging the US into another Middle East conflict.

Prime minister Binyamin Netanyahu responded positively to a direct request from Mr Obama who realised he was fighting an uphill battle to win a congressional majority. He instructed the powerful Jewish lobby, headed by the American-Israel Public Affairs Committee (Aipac), to assist the administration in dealing with the resistance on Capitol Hill.

The committee, considered one of the most effective lobby groups in Washington, rallied to the call, and brought 250 activists to the capital in an attempt to ensure a majority for a military strike. Mr Netanyahu has also held phone conversations with US lawmakers, mainly Republicans, asking them to support Mr Obama.

Dangerous gamble
Israeli politicians have been ordered by the prime minister’s office not to comment publicly on Syria, but some officials have warned that utilising the Jewish lobby is a dangerous gamble that will increase the likelihood of a Syrian counter-attack against Israel.

Some ministers even believe that Israel’s best interests are served by keeping Syrian president Bashar al-Assad in power, and have suggested that Mr Obama may be dragging Israel into a conflict it wants to avoid at all costs.

In the past, anti-Israel groups and anti-Semitic fringe organisations have accused the Jewish lobby of wielding undue influence and forcing Washington to go to war “on Israel’s behalf”. The pro-Israel lobby is now arguing that Israel’s future depends on the outcome of the American strike.

“This critical decision comes at a time when Iran is racing toward obtaining nuclear capability,” Aipac said in a statement. “Failure to approve this resolution would weaken our country’s credibility to prevent the use and proliferation of unconventional weapons and thereby greatly endanger our country’s security and interests and those of our regional allies.”

Shalom Yerushalmi, a columnist for the Ma’ariv newspaper wrote of Aipac lobbyists seeking US Congress to back the strike: “In the end, they’ll sit in Washington and the Israelis will have to go into the shelters because of them.”