Class resentment and drought fuelled conflict, which grew in to a proxy war 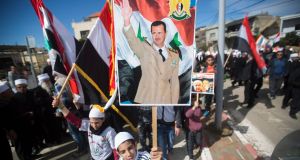 Druze men from the village of Buqatat carry a picture of Syrian president Bashar al-Assad during a rally in support of the Syrian regime at the weekend. Photograph: Atef Safadi/EPA

When Arab Spring protests against autocratic governments erupted in 2011, the common causes in Tunisia, Egypt, Syria and Yemen, the countries most affected, were too many people and too few jobs. The slogan adopted by protesters was “Bread, freedom and justice”. The priority was bread.

Between 1960 and 2014, the population more than doubled in Tunisia, trebled in Egypt, and grew fivefold in Syria and Yemen. In all four countries post-independence governments failed to deal with a never-ending baby boom.

In Syria, that failure was particularly egregious. Since 1963, Baathist governments have adhered to a socialist ideology meant to better Syrian lives.

Syria’s population soared from 4.6 million in 1960 to 23 million in 2011 although several means of birth control were available in the country. While educated city dwellers limited their children to two or three, the government did not discourage Syrians in the countryside and urban slums from having up to nine children, or teenage girls from marrying, or men from having multiple wives.

Four political developments specific to Syria sowed seeds of discontent. After the death of strongman Hafez al-Assad, in power from 1970-2000, Syria’s command economy was reshaped. During the 2001 “Damascus Spring”, President Bashar al-Assad, who had succeeded his father, not only promoted economic reform but also permitted modest political liberalisation.

But when activists established forums where they freely debated Syria’s ailments, it prompted a crackdown. Reformists were jailed or they fled abroad but the shade of the “Damascus Spring” hovered over the land: in 2011, Syrians fired up by events in Tunisia and Egypt took to the streets.

In response to the 2003 US occupation of Iraq, Syrian youths joined the armed resistance taken over by al-Qaeda, the parent of Jabhat al-Nusra and Islamic State groups that later deployed radicalised and trained Syrians and others.

In 2005, Damascus introduced a “social market economy” designed to boost foreign investment and cut government expenditure by cutting subsidies keeping the farming and working classes in food and fuel. Syria was swamped with goods from China and Turkey, Syrian factories closed and Syrians lost jobs. The promise of a safety never materialised.

The transition was too steep, mishandled and corruption-ridden. The rich became richer, the poor poorer. Consumerism exemplified by malls stocked with western designer goods, smart cafes and luxury hotels stoked resentment which stirred class conflict not found elsewhere in the Arab Spring.

Drought from 2006-2009 drove farm families off the land and into city slums, swelling the jobless ranks. When demonstrations calling for political and economic reform erupted in March 2011, alienated, unemployed young men organised and, armed by local gang bosses, joined the protests. The government responded with force, following the example of Egypt.

In Tunisia, president Zine al-Abdedin Ben Ali stepped down after a month; in Egypt, president Hosni Mubarak was ousted in 18 days; Yemen’s president Ali Abdullah Saleh held on to power for a year. Crucially, in Syria the army has remained loyal to Assad. Unlike in Tunisia, Egypt and Yemen, Syria was – due to its foreign policies – assailed by neighbouring countries. Damascus had antagonised Israel by aligning itself with Iran, hosting the Popular Front for the Liberation of Palestine, Islamic Jihad and Hamas, and supporting Lebanon’s Shia Hizbullah movement.

Pro-western Jordan had a tense relationship with non-aligned, anti-western Syria, which had cultivated close relations during the cold war with the Soviet Union and Russia afterwards. The Jordanian Muslim Brotherhood has aided Syrian rebels while the kingdom has let the US train and arm opposition fighters on its land.

Sunni Saudi Arabia, Qatar and the United Arab Emirates have supplied insurgents operating in Syria with money, arms and political support with the aim of toppling Assad and breaking the Syria-Iran connection. Western powers irked by Syria’s policies on Israel and Iran have followed suit, bringing an international dimension to a regional proxy war.