Failure of donors to honour pledges and Israel’s withholding of revenues, cited by senior PA figure 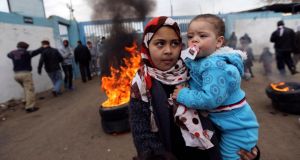 A Palestinian girl carries her sister during a protest in the southern Gaza Strip calling for reconstruction of houses. Some 150,000 Gazans remain homeless. Photograph: Ibraheem Abu Mustafa/Reuters

The Palestine Liberation Organisation has called a meeting for early next month to discuss the future of the cash-strapped Palestinian government and possible suspension of security co-operation with Israel.

In response, Washington has consulted with regional leaders with the aim of raising funds. “We’re very concerned about the continued validity of the Palestinian Authority [PA] if it does not receive funds soon,” said state department spokeswoman Jen Psaki.

Admitting that the US Congress is unlikely to provide urgent finance, she warned that dissolution of the PA or an end to security co-operation could trigger a “crisis that could gravely impact both the Palestinians and the Israelis, with potentially serious ripple effects.”

Senior Palestinian figure Nabil Shaath said the PA faced a financial crisis due to the failure of international donors to honour pledges of $2.4 billion (€2.1 billion) for PA budgetary support and $3 billion (€2.6 billion) for reconstruction of Gaza.

This failure has been compounded by Israel’s withholding of tax revenues valued at more than $200 million (€175 million) collected on behalf of the PA in protest against the accession of Palestine to the International Criminal Court.

Dr Shaath argued that the PA continued to bear the costs of security co-operation while Israel held up funds. “The situation is very dangerous. Israel and the international community are responsible for this.”

His words echoed those of UN undersecretary of political affairs Jeffrey Feltman, who warned the security council that violence between Gaza and Israel could erupt if funds were not provided for reconstruction. “Failure to deliver the necessary support is putting an almost unbearable strain on an already highly fractious environment.”

He said the inability of the PA and Hamas to “rectify the persistent governance and security issues and the slow pace of reconstruction has created an increasingly toxic environment”. He called for an end to restrictions imposed by Israel on the flow into Gaza of building materials at two Israeli-controlled goods crossings and by Egypt on Palestinian travellers at the Rafah crossing between Gaza and Egypt.

The PA has had to borrow from banks to pay its 180,000 employees a percentage of their salaries while essential Palestinian institutions are in danger of closing down. Among them is the Makassed Hospital in East Jerusalem, which has a deficit of $30 million (€26 million). The hospital treats 16,000 Palestinian residents of the city as well as tens of thousands from outlying areas.

Separately, the EU has contributed €12.7 million, Spain €800,000 and Ireland €500,000 to a PA programme providing cash and in-kind aid to the most vulnerable Palestinians in the West Bank and Gaza.