Mullah Baradar was a former deputy commander of the organisation 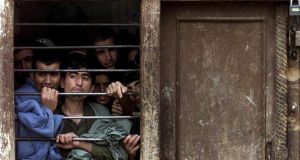 A file photograph of former Taliban fighters sitting in their cells in the prison in northern Afghan town of Shibirgan. Photograph: Shamil Zhumatov/Reuters.

Mullah Baradar, the former deputy commander of the Taliban, was freed today, a Pakistani intelligence official and a security official told AP.

Pakistan’s foreign ministry had earlier announced that Baradar would be released.

The Taliban’s Afghanistan spokesman, Zabihullah Mujahid, said he could not yet confirm the release.“We have not received any official confirmation about his release,” Mr Mujahid told AFP.

The Afghan government has repeatedly asked Pakistan to release Baradar and hopes he can help with peace negotiations. But some analysts and officials doubt he will make much of a difference.

Afghanistan is trying to inject life into its attempts to negotiate an end to the Islamist Taliban insurgency as most Nato combat troops prepare to pull out by the end of 2014, leaving the country to handle its own security.

Baradar was once a close friend of the reclusive Taliban leader, Mullah Mohammad Omar, who gave him his nom de guerre, “Baradar” or “brother”.

Even before his detention, Baradar was known as a pragmatic and level-headed operator who had once reached out to Kabul to seek a peace settlement, according to Afghan officials.

But critics say his years in Pakistani detention may have eroded his sway over the fast evolving insurgency, and there are doubts over whether Mullah Omar would agree to talk to his former protégé in the first place.

After the 2001 invasion of Afghanistan by US-led forces, Baradar emerged as the main day-to-day commander responsible for leading the campaign against them, planning offensives and bomb attacks.

Pakistan arrested Baradar under murky circumstances in a joint operation with the CIA in 2010 in the southern city of Karachi.