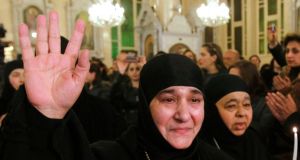 Mother Pelagia Sayyaf arrives in Damascus yesterday after her release.

Thirteen Greek Orthodox nuns and their three maids, held in captivity for more than three months by a Syrian rebel group affiliated to al-Qaeda, have arrived back in Damascus.

They were freed as part of a deal in which 153 female prisoners of the Assad regime were also released.

Smiling but looking tired, the nuns were brought to a Lebanese border crossing where they were handed over to security chiefs from Qatar and Lebanon who had secured the deal – one of only a few brokered by senior regional officials during three devastating years of war in Syria.

“We were treated well,” said Mother Agiah of her captors, who are believed to be from the Jabhat al-Nusra rebel group. “They were very sweet with us. We were not bothered.”

Another nun denied reports their captors had forbidden the nuns from wearing crosses around their necks. But after being driven from Lebanon to Damascus, the group’s leader, Mother Pelagia Sayyaf, who heads the Mar Takla monastery, said: “We took off our crosses because we were in the wrong place to wear them.”

The kidnappers denied they acted out of sectarian motives, suggesting they were holding the women as bargaining chips to be traded for prisoners, and to deter regime attacks on areas held by Jabhat al-Nusra.

The claim a large sum of money had been paid was denied by Lebanon’s security chief, Gen Abbas Ibrahim, and by Qatari officials.

A report to be released by Unicef today reveals that more than one in 10 children have now left Syria and that million others are living under siege inside the country. – ( Guardian service)