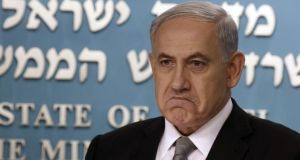 Israeli prime minister Binyamin Netanyahu has dismissed the two leaders of the centrist parties in his coalition, accusing them of plotting a “putsch”. Photograph: Gali Tiboon/EPA

Israel is heading for new elections after prime minister Binyamin Netanyahu dismissed the two leaders of the centrist parties in his coalition, accusing them of plotting a “putsch” against him.

The elections are likely to be held in March with a new government only sworn in in May, leaving Israel in limbo for 6 months with a minority right-wing caretaker government unable to pass a budget or any significant legislation or endorse a diplomatic initiative to break the impasse with the Palestinians.

Speaking at a news conference today after the decision to fire the centrist ministers, finance minister Yair Lapid, head of Yesh Atid, and the leader of Hatnua, justice minister Tzipi Livni, Mr Netanyahu said they had undermined three central areas of government policy: the campaign to prevent a nuclear Iran; the demand that Palestinians recognise Israel as the Jewish nation-state, and unrestricted building in Jerusalem. He signaled out the meeting between Livni and Palestinian president Mahmoud Abbas in May, in defiance of government policy.

“In the last couple of weeks and over the last day, Lapid and Livni have forcefully attacked the government,” he said. “I will not tolerate opposition anymore within the government.”

Mr Netanyahu said he wanted elections so he could “receive a clear mandate from the people to lead Israel”.

The government has been in a state of near paralysis for weeks with ideologically-opposed coalition partners blocking legislation introduced by rival parties.

On Monday night Mr Netanyahu met with Mr Lapid and presented him with an ultimatum consisting of five conditions, including support for his Jewish nationality bill, increasing military expenditure and dropping Mr Lapid’s flagship legislation abolishing VAT for young couples purchasing their first apartment. After Mr Lapid rejected the ultimatum, new elections were only a matter of time.

The deep mistrust and suspicions between the coalition partners reached new heights over recent weeks. Mr Netanyahu accused Lapid and Livni of plotting to form an alternative government together with opposition parties. They accused him of striking a secret deal with opposition ultra-Orthodox parties to back him for prime minister after an election.

The current government only survived a year and ten months.

Mr Netanyahu will enter the election campaign seeking a fourth term as prime minister. Recently, with the economy stuttering and a series of militant attacks in Jerusalem and elsewhere, his popularity has fallen. However, he remains by far the most popular choice amongst the public for prime minister.

The most likely scenario is that all the right-wing and religious parties elected to the next Knesset will recommend to the president that Mr Netanyahu form the next government, and with the backing of a new centre-right party led by former Likud minister Moshe Kahlon, Mr Netanyahu should be able to garner the support of a majority in the 120-member Knesset.

Yesh Atid said Mr Netanyahu’s “haphazard move of firing the ministers is an act of cowardice and loss of control.”

“We are sad to see that he has chosen to act without consideration for the national interest and to drag Israel to unnecessary elections.”

Ms Livni said the elections will be between an “extremist, paranoid and provocative” government and a “Zionist” government.

Opposition leader Yitzhak Herzog, the head of the Labour party, called for a centre-left bloc to defeat Mr Netanyahu.