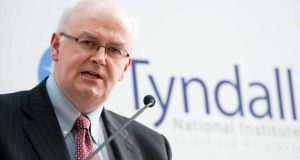 The Royal College of Surgeons in Ireland (RCSI) has robustly defended its operations in Bahrain, saying it is acting as a “valuable bridge” between authorities and reformers in the Gulf state.

RCSI chief executive Prof Cathal Kelly admitted the medical profession in Bahrain was “polarised” between Sunni – the religion of the monarchy – and Shia. But he rejected suggestions that graduates of the college’s Bahraini campus were facing discrimination.

Since 2010 only one of its graduates had failed to secure an internship, and he drew a parallel with the medical profession in Ireland where “it was not that long ago . . . hospitals were characterised as Protestant or Catholic” and employment policy followed suit.

Addressing the Oireachtas committee on education yesterday, Prof Kelly said he was “not an advocate or apologist for the government or the country” but Bahrain had made strides in economic development; it had a better immunisation rate than Ireland and had free primary care and free education.

Caroline Spillane, chief executive of the Medical Council, told the committee it was planning a visit to Bahrain later this year following a request from the campus for accreditation. Assuring the independence of this process, she said the council would expect a high degree of participation from students and interviews would be done confidentiality.

Prof Jim Finucane for the RCSI said the absence of such accreditation was “penalising” graduates as without it they were unable to take up posts in some European countries. Such medical students should not be made “the whipping boys for the perceived problems of the regime”.

“I think what we are doing is the very definition of soft power,” he said, adding the RCSI had shown “an Irish institution does not cut and run” nor abandon its students “and frankly I am proud of that”.

He was responding to questions from Senator Averil Power (FF) who said the college was purporting to be neutral but “that kind of silence is not apolitical”.