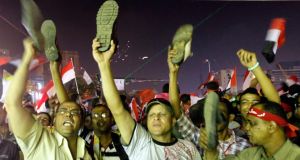 It is strange to see pro-democracy supporters in Egypt taking to the streets to demand the resignation of their first ever democratically elected president. Photograph: Reuters

Probably the hardest part of a successful revolution is bringing it to an end. Seldom are the revolutionaries all in pursuit of the same goal, so it follows that not all of them will be satisfied with whatever new order is established. And once the genie of direct action has been let out of the bottle, the use of force to oppose whatever is disagreeable becomes almost second nature.

And so it has been with Egypt.

In 2011 a number of disparate groups rose in opposition to the autocratic Egyptian president, Hosni Mubarak. When Mubarak fell, the common cause of his enemies fell with him. He was, in effect, the glue that had momentarily united democrats, religious minorities, secularists, various left-leaning groups and religious fundamentalists.

After Mubarak had been toppled, each of the major constituencies wanted to remodel the country according to its own ideals. This, of course, was impossible, and no matter which side came to power in last year’s presidential election further conflict appeared inevitable.

As it happened, only the Muslim Brotherhood was sufficiently organised and unified to fight an election, so it was no surprise that its candidate, Mohammed Morsi, emerged as the winner. The only surprise was that he won just 51.7 per cent of the vote.

Upside-down society
Still, it is strange to see pro-democracy supporters in Egypt taking to the streets to demand the resignation of their first democratically elected president, never mind to witness them celebrating the issuing of a thinly veiled threat by the military to assume his powers.

It is equally novel to hear the Muslim Brotherhood, hardly known for its egalitarian inclinations, cite a democratic mandate in defence of its right to remain in power. It’s as though the protagonists have swopped roles in Egypt: the “good guys” are acting and sounding like the “bad guys”, and vice versa.

For those of us in this part of the world who champion democracy, the situation in Egypt is disconcerting. The temptation is to throw our weight behind the protesters rather than their fundamentalist president. But we would be wrong to do that.

No matter how much we sympathise with the political objectives of the pro-democracy activists, and oppose the aims of the Muslim Brotherhood, Morsi was indeed democratically mandated. It would be hypocritical to support his forced removal.

A petition, which opposition group Tamarod claims has been signed by 22 million Egyptians, lists complaints against Morsi. These include that security has not been restored since the 2011 revolution; the poor have no place in society; the government has had to beg the International Monetary Fund for a €3.68 billion loan to help shore up public finances; there has been no justice for people killed by security forces during the uprising and at subsequent protests; no dignity is left for Egyptians or their country; the economy has collapsed; and Egypt is following in the footsteps of the US.

Leaving aside the fact that many of these charges are vague and highly subjective, Morsi inherited a deeply corrupt, economically bereft country with high unemployment and within which law and order had all but collapsed. Is it not expecting too much that he could have sorted out most of these problems during the mere 12 months he has been in office?

Admittedly, Morsi hasn’t done himself any favours. He has sought to placate no one except his fellow Islamists. He tried, unsuccessfully, to restrict the right of the judiciary to challenge his decrees. He has placed restrictions on free speech and freedom of assembly. And he appointed to the governorship of Luxor province a former member of a militant Islamist group that carried out an attack on tourists there in 1997, which killed 58 people.

If we find the situation in Egypt disconcerting, think of how the US government, which funds the Egyptian army, must feel about it. As Jeremy Bowen of the BBC has pointed out, the sight of armed forces funded by US taxpayers removing a democratically elected president will not go down well in Washington. It should not go down well with any of us.

Obama’s interjection
One can only presume that it was fear of the army grabbing power that prompted Barack Obama’s recent inane interjection on Egypt. According to the White House, during a phone call Obama told Morsi that “democracy is about more than just elections”.

Morsi has not committed the only political sin that would justify him being toppled by any means other than the ballot box: he has not tried to interfere with the right of the electorate to vote him out of office.

Given the chance, he may yet do so before the next presidential election (due in 2016). But he can’t be judged on what he might do.