Israeli soldiers speak out on abuse of Palestinians

Former Israeli soldiers will launch a striking photography exhibition in the Gallery of Photography which runs until June 29th. Video: Darragh Bambrick 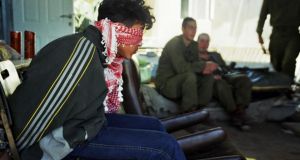 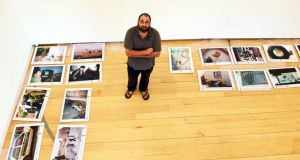 Yehuda Shaul of Breaking the Silence, a group of former Israeli soldiers who served in Gaza and the West Bank, with an exhibition of photographs taken by Israeli soldiers, at the Gallery of Photography in Dublin. Photograph: Eric Luke

Yehuda Shaul, a former Israeli soldier who served in the West Bank and Gaza, tells how he and fellow soldiers secured a television screen one night while out on patrol, to watch a World Cup match.

“The way we passed those night patrols was to bang on random houses, no reason and we’d go in, wake everyone up, men in one room, women in another, mess everything up, onto the next house.

“That night we wanted to watch the match so we were looking for a house that had a satellite dish. We found one, went in and locked the family in the basement while we watched the match. Why wouldn’t we? That’s what we do in the occupied territories.

“The most important message you get from your superiors in the Israeli military is that every Palestinian needs to feel Israel is at the back of their neck. So, quickly, you adapt to the environment; you don’t see the Palestinian in front of you as human. They are reduced to being an object.”

A photograph accompanies the story, of a young Israeli soldier grinning to the camera, in a Palestinian family’s living room, the aforementioned football match on their television in the background.

It is one of hundreds of chilling photographs taken by former members of the Israeli Defence Forces, of themselves and their colleagues engaging in what Shaul says becomes “normal” behaviour after being sent to the occupied territories of the West Bank and Gaza. A fraction – about 85 – will be exhibited by the Breaking the Silence project in Dublin from today.

Other photographs include one of a Palestinian man, blindfolded, his hands tied, his head bowed. A young Israeli soldier crouched down beside him beams to the camera in an image reminiscent of some that emanated from Abu Ghraib prison in Iraq, in 2003.

Another shows a teenage boy, again hands tied, blindfolded and left sitting, while Israeli soldiers chat in the background. One of the most disturbing is one of children, who appear aged between about seven and 10, “playing soldiers”.

Some are clearly ‘playing’ Palestinians, their hands against a wall, their legs splayed while another ‘plays’ the occupying soldier, pointing a stick at them as a ‘gun’. An Israeli soldier looks on. “This [kind of] experience is normal to these young kids,” says Shaul “It’s their reality from a young age.”

Breaking the Silence was initiated by Shaul 10 years ago, after he completed his tour of duty with the IDF in Hebron. All Israeli males must spend three years in the military and females two years, with some exceptions, after high school.

“When I came back, I began to question what I had done, what I had done to Palestinian people. Once I understood the reality of what I had done I found I couldn’t continue unless I did something. I started to talk to military colleagues and found they felt the same. The one thing we kept bumping into was that people hadn’t a clue.”

Israelis, he says, didn’t know – or didn’t want to know – the abuses he says are perpetrated every day in the occupied territories. “Soldiers come home, maybe for a weekend. It’s a different reality. They don’t talk about the reality of the military. What happens in the West Bank stays in the West Bank.”

He and colleagues began gathering photographs and testimonies and were soon exhibiting all over Israel, including in the parliament, the Knesset.

Their work created “noise”, he says and for a time they were one of the biggest stories in the country. It has opened a discussion and some awareness but he says most Israelis choose to say of the occupation: “If it ain’t broke, don’t fix it.”

“What we have documented are not isolated incidents. This is a story of what happens when a nice kid from Jerusalem or Tel Aviv gets sent to the Territories. They adapt.”

Asked to comment, a spokesman for the Israeli embassy in Dublin said: “Breaking the Silence represents only an insignificant minority of IDF veterans (less than 1,000). It is not an objective human rights organisation. It is a political organisation devoted to tarnishing the reputation of the Israeli Defence Forces and, by extension, the Israeli state.

“Breaking the Silence are ‘useful idiots’ allowing themselves to be manipulated by the international boycott, divestment, sanctions campaign against Israel. It seeks to delegitimise and ultimately destroy the state of Israel as the national homeland of the Jewish people.” Breaking the Silence has exhibited in the US, Berlin, Madrid, Amsterdam, Copenhagen and Brussels and continues to gather photographs and testimony from returning soldiers. It runs at the Gallery of Photography in Dublin’s Temple Bar from today until June 29th and is free. It is hosted by Trócaire.