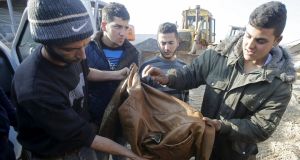 Bystanders check the jacket of a Palestinian killed by Israeli soldiers near where the Israeli military said another Palestinian had tried to stab a soldier in the West Bank city of Hebron, January 12th, 2016. Photograph: Mussa Qawasma/Reuters

Israeli soldiers have shot dead three Palestinians in the occupied West Bank on Tuesday, including one the military said had tried to stab a soldier, as months of tension continued to simmer.

The Palestinian Health Ministry said a 21-year-old Palestinian was killed by Israeli army gunfire during a confrontation between troops and protesters in the town of Beit Jalla, near Bethlehem. The military said troops had fired at “rioters who hurled firebombs and rocks at the soldiers”.

In a separate incident, a military spokeswoman said troops fatally shot a Palestinian who got out of a car and tried to stab a soldier in the West Bank city of Hebron. The driver of the vehicle was shot and wounded, and fled the scene, the spokeswoman added. Palestinian officials said he died.

Since October 1st, Palestinian stabbings, car-rammings and shooting attacks have killed 24 Israelis and a US citizen. The wave of bloodshed has raised fears of wider escalation, a decade after the last Palestinian uprising subsided.

During the period, Israeli forces or armed civilians have killed at least 142 Palestinians, 90 of whom authorities described as assailants. Most of the others were killed in clashes with security forces.

Four Israelis, including a soldier and a prison officer, were charged on Tuesday with aggravated assault in connection with the death of an Eritrean national who was shot and beaten after being mistaken for a gunman during an attack in the southern Israeli city of Beersheba on October 18th last.

An Arab citizen of Israel shot and killed one person and wounded 11 in the incident. He was shot dead, and a security guard also fired at the Eritrean, wounding him.

The Eritrean, an asylum-seeker, was then set upon by the four defendants, who prosecutors said kicked him as he lay on the ground and hit him with a bench. He died of his wounds.

The security guard, who authorities said had acted reasonably in the heat of the shooting attack, was not charged.