Attackers shot dead by security forces at Damascus Gate, according to police 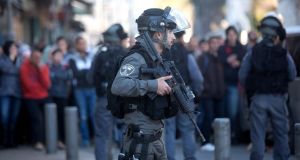 Three Palestinians armed with guns, knives and explosives killed an Israeli border policewoman and seriously wounded another before being shot dead by nearby officers at an entrance to Jerusalem’s walled Old City on Wednesday, Israeli police said.

It was the latest in a spate of stabbings, shootings and car-rammings by Palestinians that has killed 27 Israelis and a US citizen since October. Israeli forces have killed at least 155 Palestinians, 101 of them assailants according to authorities. Most of the others have died in violent protests.

The Palestinians launched the attack at the Damascus Gate, a busy plaza in East Jerusalem, after being stopped by police for an identity check, a police spokeswoman said.

All of the three attackers were carrying concealed weapons and at least one of them opened fire with an automatic rifle, killing one of the officers before they were shot dead by Israeli security forces, the spokeswoman said.

The other policewoman was stabbed and wounded, and two pipe bombs were found at the scene, she said.

The surge in attacks has been partly fuelled by Palestinian frustration over the collapse of US-sponsored peace talks in 2014, the growth of Jewish settlements on occupied land they seek for a future state, and Islamist calls for the destruction of Israel.