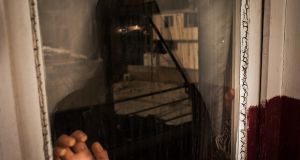 Aws, a pseudonym, in southern Turkey where she now lives. She used to be a member of the Khansaa Brigade, the Islamic State’s female morality police. Photograph:Tara Todras-Whitehill/The New York Times

Dua had been working for only two months with the Khansaa Brigade, the all-female morality police of Islamic State, when her friends were brought to the station to be whipped.

The police hauled in two women she had known since childhood, a mother and her teenage daughter, both distraught. Their abayas, flowing black robes, had been deemed too form-fitting.

When the mother saw Dua, she begged her to intercede. The room felt stuffy as Dua weighed what to do. “Their abayas really were very tight,” she says. “I told her it was their own fault; they had come out wearing the wrong thing. They were unhappy with that.”

Dua sat back down and watched as the other officers took the women into a back room to be whipped. When they removed their face-concealing niqabs, they were also found to be wearing makeup. It was 20 lashes for the abaya offense, five for the makeup, and another five for not being meek enough when detained.

Their cries began ringing out, and Dua stared hard at the ceiling, a lump building in her throat. In the short time since she had joined the Khansaa Brigade in her hometown, Raqqa, in northern Syria, the morality force had grown more harsh. Mandatory abayas and niqabs were still new for many women in the weeks after the jihadists of Islamic State, also known as Isis, purged the city of competing militants and took over.

The mother and daughter went to Dua’s parents’ house afterwards, furious with her and venting their anger at Islamic State. “They said they hated it and wished it had never come to Raqqa,” Dua says. She pleaded with them, explaining that as a young and new member of the Khansaa Brigade, there was nothing she could have done.

Dua’s second-cousin Aws also worked for the brigade. Not long after Dua’s friends were whipped, Aws saw fighters brutally lashing a man in Muhammad Square. The man, about 70, frail and with white hair, had been heard cursing God. As a crowd gathered, the fighters dragged him into the public square and whipped him after he fell to his knees.

Today, Aws (25) and Dua (20) live in a small city in southern Turkey, having fled Raqqa and its jihadist rulers. They met up here with Asma (22), another defector from the Khansaa Brigade, and found shelter in the city’s large community of Syrian refugees.

Raqqa is widely known now as the capital of Islamic State’s self-declared caliphate, the focus of heavy airstrikes by a growing number of countries seeking revenge for the group’s recent terrorist attacks.

But the city in which the three women came to adulthood used to be different. Identified here by nicknames, the women spoke for many hours, recalling their experiences under Islamic State rule and how the jihadists had utterly changed life in Raqqa.

Dua’s father is a farmer, and money was tighter. But her social life was closely intertwined with that of Aws, and the cousins loved their charming city.

“In the summer, everyone went out at night and stayed out late, because it was so hot during the day,” says Dua.

The women keep pictures of their old lives in Raqqa on their mobile phones, scenes from parties and countryside outings. Aws’s gallery includes days on the lakeshore, her friends in bathing suits, dancing in the water.

Asma was studying business at Euphrates University. Her mother was a native of Damascus, the capital, and Asma spent some of her teenage years there seeing friends, swimming at pool parties, going to cafes.

All three belonged to a generation of Syrian women who were leading more independent lives than ever before. They mixed freely with young men, socialising and studying together in a religiously diverse city with relatively relaxed mores.

Many young women dressed in what they called sport style, baring their knees and arms in the summer and wearing makeup. And while Raqqa’s more conservative residents wore abayas and veils, women were going to college in greater numbers and getting married later. Most men and women chose their own spouses.

When the uprising against the government of President Bashar Assad began rippling across Syria in 2011, it seemed distant from Raqqa. As news of fighting and massacres started filtering in, it was mostly from faraway cities in the country’s west, such as Homs.

Even as displaced people began appearing in Raqqa, and the city’s young men started to sign up with anti-Assad groups in the area, including the Nusra Front and Islamic State, the fabric of life seemed intact.

At the start of 2014, everything changed. Islamic State wrested full control of Raqqa and made the city its command centre, violently consolidating its authority. Those who resisted, or whose family or friends had the wrong connections, were detained, tortured or killed.

Islamic State has come to be known around the world by names such as Isis and Isil. But in Raqqa, residents began calling it Al Tanzeem – the Organisation. And it quickly became clear every spot in the social order, and any chance for a family to survive, was dependent on the group.

Dua, Aws and Asma were among the lucky: the choice to join was available to them. Each chose to barter her life, through work and marriage, to Islamic State.

None of them subscribed to its extreme ideology, and even after fleeing their homes and going into hiding, they still struggle to explain how they changed from modern young women into Islamic State morality enforcers.

In the moment, each choice seemed like the right one, a way to keep life tolerable: marrying fighters to assuage Islamic State and keep their families in favour; joining the Khansaa Brigade to win some freedom of movement and an income in a city where women had been stripped of self-determination.

The cousins had their misgivings about joining. But they had married fighters, choosing to survive Raqqa’s occupation by aligning with the Organisation. Working with the brigade was a chance to do more than just subsist, and it paralleled their husbands’ work. And the full extent of the brigade’s oppressiveness would emerge only with time.

As with Aws’s husband, Dua’s, Abu Soheil, did not want children. But Dua was not in a rush, and she did not press him. One week in July 2014, Abu Soheil did not return for three nights. On the fourth day, a group of fighters knocked on Dua’s door. They told her Abu Soheil had blown himself up in a battle against the Syrian army at Tal Abyad, on the border with Turkey.

Days later, she learned Abu Soheil had in fact killed himself in an operation not against the hated Syrian army but against a competing rebel group. “I cried for days,” she says. “He died fighting other Muslims.”

Just 10 days later, another man from her husband’s unit came to the house. He told Dua she could not stay home alone and would need to marry again, immediately. That was the moment that broke her. The Organisation had made her a widow and wanted to do so again and again, turning her into a perpetual temporary distraction for suicidal fighters. There was no choice left, no dignity, just the service demanded by Islamic State’s need to feed men to its front lines.

She knew she had to escape, even though it would mean leaving the house that should have been her inheritance.

The news came for Aws not long after it did for Dua. Abu Muhammad had also killed himself in a suicide operation. She was devastated. She had no time to recover before the Organisation came knocking.

When Aws left four months later, it was harder to cross the border because Turkey had started tightening security. She contacted Dua and was put in touch with the man who helped get her out.

After years of shame and disappointment, none of the three could imagine ever going back, even if Islamic State falls. The Raqqa that was their home exists only in their memories.

“Who knows when the fighting will stop,” Asma says. “Syria will become like Palestine; every year, people think: ‘Next year it will end. We will be free.’ And decades pass. Syria is a jungle now.”

“Even if one day things are all right, I will never return to Raqqa,” says Aws. “Too much blood has been spilled on all sides – I’m not talking just about Isis, but among everyone.” – New York Times service