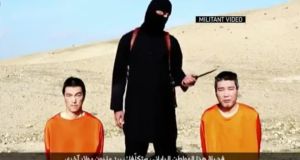 A screengrab from a video, titled ‘The Islamic State: A message to the government and people of Japan’ which was posted on militant websites associated with the extremist group.

Japan has been dragged into the turmoil in the Middle East after Islamic State militants threatened to behead two of its nationals.

The threat, issued via a video on a jihadist website, said Tokyo had 72 hours to pay $200 million (€172.5 million) and stop the execution.

Footage from the video showed the now familiar sight of a black-clad jihadist waving a knife as he talked to the camera.

His kneeling captives, identified as Kenji Goto and Haruna Yukawa, flanked him with their hands tied behind their backs, dressed in orange jumpsuits.

The threat, issued directly to Japan’s government as prime minister Shinzo Abe tours the Middle East, has stunned a country that had largely avoided the chaos that has engulfed the region.

Mr Abe reacted angrily to the video, but said he would not bow to terrorism.

“Using human lives as shields for a threat is an unforgivable act of terrorism,” he said at a press conference in Jerusalem on Tuesday.

“I am furious about this. These [two Japanese citizens] should be released immediately.”

Speaking in British-accented English, the masked jihadist said Japan had “willingly taken part in a holy war” and provided $100 million to “kill Muslim women and children and destroy Muslim homes”, an apparent reference to a pledge by Mr Abe of $200 million in “non-military aid” to countries in the region fighting Islamic State.

Mr Abe made the pledge in Cairo on Saturday as part of a $2.5 billion aid package, clearly dating the video to some time this week.

Japanese commentators speculate that the militant in the video is “Jihadi John”, the same man suspected of beheading journalists James Foley, Steven Sotloff and several other captives last year.

Islamic State continues to control swathes of Syria and Iraq. Over 900 air strikes by a US-led coalition since last year have apparently failed to halt its advance.

Mr Goto (47) is a well-known freelance journalist who has for years shot documentaries in the Middle East for Japan’s state broadcaster NHK and other TV outlets.

Friends said he left for his latest trip to cover the conflict in Syria last year. “Last time we saw him, all his friends said ‘You’d better not go back there,’ but he said he had to,”recalls Yuki Hidaka, a colleague of Mr Goto’s who works for NHK.

“He wanted to convey what was happening in that part of the world.”

Mr Yukawa (42) appears to have been a self-styled soldier of fortune when he was captured last August by Islamic militants.

Colleagues say his life had unravelled before he left Tokyo last year and that he saw the Middle East conflict as a chance to make a fresh start as a security contractor to Japanese companies operating there.

“He felt his life had reached its limit,” his father, Shoichi, told Reuters recently.

Tokyo responded by pledging $120 million in aid to fund an African-led campaign against radical Islamists in Mali, saying the money reflected its “unshaken resolve to fight terrorism”.

In the video, the jihadist said Japan would have to pay for its economic support against Islamic State. Gesturing with a knife to both men, he said their lives would cost the Japanese government $100 million each.

The size of the ransom seems to suggest that Islamic State does not intend to release the men - France and Spain are known to have paid smaller amounts to free its citizens in 2014.

1 Covid-19: ‘Green list’ may shorten as Cabinet looks to tighten travel restrictions
2 Tributes to John Hume flood in from Irish and international politicians
3 David Trimble: After the big dinner in Oslo, somebody said why don’t we party together?
4 Maureen Dowd: The US president and the damage done
5 Coronavirus experience shows how Greece’s weakness is its sunshine
Real news has value SUBSCRIBE