Sunni insurgents, who have declared a caliphate, impose radical brand of Islam 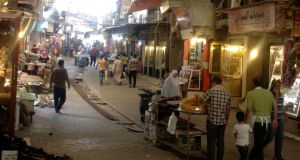 Residents shop at a market Mosul. Sunni insurgents run vice patrols in the city that answer to a morality committee which has shut Mosul’s college of fine arts and physical education, knocked down statues of famous poets and banned smoking and waterpipes. Photograph: Reuters

Islamic State, the al-Qaeda offshoot formerly known as the Islamic State in Iraq and Syria, which seized large swathes of northern Iraq last month, has warned women in the city of Mosul to wear full-face veils or risk severe punishment.

The Sunni insurgents, who have declared a caliphate in parts of Iraq and Syria and have threatened to march on Baghdad, also listed guidelines on how clothes should be worn, part of a campaign to violently impose their radical brand of Islam.

“The conditions imposed on her clothes and grooming was only to end the pretext of debauchery resulting from grooming and overdressing,” said the Islamic State in a statement. “This is not a restriction on her freedom but to prevent her from falling into humiliation and vulgarity or to be a theatre for the eyes of those who are looking.”

The insurgents have been systematically stamping out any religious or cultural influences they deem non-Islamic since their lightning sweep through northern Iraq.

US military and Iraqi security officials estimate the Islamic State has at least 3,000 fighters in Iraq, rising to 20,000 when new recruits since last month’s advance are included.

The Islamic State issued guidelines on how women should dress: the hands and feet must be covered, clothes must not hug the body and perfume is forbidden.

The insurgents run vice patrols in Mosul. These answer to a morality committee which has shut Mosul’s college of fine arts and physical education, knocked down statues of famous poets and banned smoking and waterpipes.

Women have been told never to walk unaccompanied by a male guardian, and shopkeepers have been ordered to cover mannequins’ faces with veils.

A man was recently whipped in public for sexually harassing a woman.

Islamic State militants view Iraq’s majority Shias as infidels who deserve to be killed, and have told Christians to either convert to Islam, pay a religious levy or face death.

Islamic State’s radical views have alarmed many Iraqis, but there are no signs that Iraq’s government will be able to regain control of captured areas.

Political paralysis has eroded faith in Iraqi leaders. Politicians have been in deadlock over forming a new government since an election in April, and the next step – choosing a prime minister – may prove far more difficult.

Iraq’s parliament elected a senior Kurdish politician president on Thursday, a significant step in a delayed process to create a government capable of uniting the country and countering insurgents. – (Reuters)