Islamic State says it murdered 20 tourists and policeman in Tunis

Tunisian officials say more than 3,000 young men have gone to fight with IS in Syria 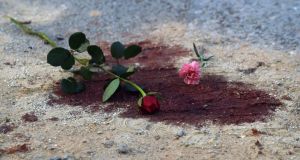 Roses on bloodstains in front of the National Bardo Museum in Tunis. Photograph: Fadel Senna/AFP/Getty Images

Islamic State yesterday claimed responsibility for the murder of 20 foreign tourists and a policeman at the Bardo museum in Tunis on Wednesday.

“We tell the apostates who sit on the chest of Muslim Tunisia. what you have seen today is the first drop of the rain,” said an audio recording posted by the group, which last summer declared a “caliphate” in northern Syria and Iraq.

The recording said “knights of the Islamic State” fired until they ran out of bullets. It promised further attacks and called the museum massacre a “blessed invasion of one of the dens of infidels and vice in Muslim Tunisia”.

Tunisian authorities identified the gunmen as Hatem al-Khashnawi and Yassin al-Abidi, both in their 20s. A photograph on Tunisian websites showed the young men, one wearing a red hoodie, lying in a pool of blood inside the museum.

Local newspapers reported that Abidi had fought in Iraq and Libya. Tunisia’s prime minister Habib Essid confirmed he had been under surveillance, fuelling criticism from some quarters of alleged government negligence in fighting terrorism. Security forces were applauded by onlookers when the siege of the Bardo ended on Wednesday.

Tunisian officials say more than 3,000 young men have gone to fight with IS in Syria, of whom between 400 and 500 have returned.

President Beji Caid Essebsi, the 88 year-old who took office in December, has vowed to combat “this savage minority . . . until our dying breath.” Essebsi announced the army will be deployed in Tunisia’s cities.

The “Arab Spring” revolutions started in Tunisia, and the country prides itself on having held free elections and drawn up a new constitution, under which women enjoy greater rights than anywhere else in the Arab world.

But the country’s economy was in dire straits even before Wednesday’s attack, which targeted the tourism industry that accounts for 7 per cent of Tunisia’s GDP.