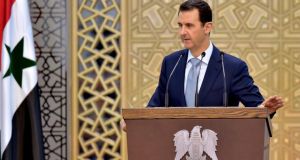 People have been accused of collaboration for having a picture of Syrian president Bashar al-Assad on their phones, according to one source. Photograph: EPA

Gunmen have abducted 230 civilians, including at least 60 Christians, in a central Syrian town hours after it fell to Islamic State, according to the Syrian Observatory for Human Rights.

The monitoring group said the civilians were taken on Thursday in the town of Qaryatain, a day after it was captured by Islamic State, also known as Isis.

“Daesh kidnapped at least 230 people, including at least 60 Christians, during a sweep through Qaryatain,” observatory chief Rami Abdurrahman said, using an Arabic acronym for the jihadi group.

A photograph of a handwritten list has emerged purporting to show the names of the captured Assyrian Christians.

Many of the Christians had fled from Aleppo province, in Syria’s north, to seek refuge in Qaryatain, Abdurrahman said.

He added that those abducted were wanted by Isis for “collaborating with the regime”, and their names were on a list used by the jihadis as they swept through the town.

Families who tried to flee or hide were tracked down and taken by the jihadis, he said.

Amnesty International said it was investigating what it described as a “very worrying” report. Neil Sammonds, its Syria researcher, said: “This does sound credible. The Syrian Observatory is a reliable source most of the time. This is larger scale than usual, but, in different parts of the country where they have been operational, IS have picked up large groups of civilians, but often people flee before IS arrives. It is rare that they get into towns where thousands of people are still living.

“We know that Christians and ‘collaborators’ are a target of IS. They are at the highest risk either for some kind of summary justice or for Christians in particular, some kind of high ransom demand or exchange.

“This week I was getting testimony from someone who had been held by Isis, who said some people are accused of collaboration even if they have picture of [Syrian president] Bashar al-Assad on their phones. The ex-detainee was saying that lots of people have a picture of Bashar on the phone because it helps them get through checkpoints.”

Qaryatain lies at the crossroads between Isis territory in the eastern countryside of Homs and areas further west in the Qalamun area.

It had a pre-war population of 18,000, including Sunni Muslims and around 2,000 Syriac Catholics and Orthodox Christians.

According to a Syrian Christian who lives in Damascus but is originally from Qaryatain, the town’s Christian population has dropped to only 300.

In May, masked men abducted Syrian priest Jacques Mourad from the Syriac Catholic Mar Elian monastery in Qaryatain, near the Isis-captured ancient city of Palmyra.

Mourad, who was known to help both Christians and Muslims, was preparing aid for an influx of refugees from Palmyra.