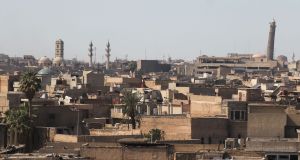 The Mosul skyline featuring the historic leaning minaret of the Great Mosque of al-Nuri in Mosul, where Islamic State (IS) group leader Abu Bakr al-Baghdadi declared his caliphate back in 2014. Photograph: Ahmad al-Rubaye/AFP/Getty Images

The Islamic State group destroyed the al-Nuri mosque in Mosul and the famous leaning minaret when fighters detonated explosives inside the structures, Iraq’s ministry of defence has said.

The mosque – also known as Mosul’s Great Mosque – is where Islamic State leader Abu Bakr al-Baghdadi declared a so-called Islamic caliphate in 2014 shortly after the city was overrun by the militants and was seen as a key symbolic prize in the fight for Iraq’s second largest city.

“The Daesh [Islamic State] terror gangs committed another historical crime by blowing up the al-Nuri mosque and its historical al-Hadba minaret,” the Iraqi military statement said.

The explosions happened as Iraq’s elite counterterrorism service units got to within 50m (164ft) of the mosque, the statement said.

Iraqi forces launched a push into Mosul’s Old City earlier this week where the last Islamic State, also known as Isis, fighters are holed up with an estimated 100,000 civilians, according to the United Nations.