Militants from the Islamic State destroyed a temple in the ancient ruins of Palmyra in Syria, activists and government officials said on Sunday, August 23rd. Video: Reuters 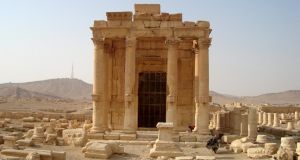 The temple of Baal Shamin in the historical city of Palmyra, which was destroyed by Islamic State. Photograph: Reuters/Stringer

Islamic State militants have razed a fifth-5th century Roman Catholic monastery and blown up one of the best-preserved first-1st century temples in Palmyra, the ancient Syrian city that is one of the world’s most important archaeological sites, according to government officials and local activists.

And that was just this past week – in one Syrian province. Much like the grinding slaughter of human beings, the ravaging of irreplaceable antiquities in Syria and Iraq has become something of a grim wartime routine. Yet the cumulative destruction of antiquities has reached staggering levels that represent an irreversible loss to world heritage and future scholarship, archaeological experts and antiquities officials say.

It has accelerated in recent months as the self-declared Islamic State has stepped up its deliberate demolition and looting, piling on to battle damage wreaked by government forces and other insurgents in Syria’s four-year civil war. That has brought antiquities lovers on all sides to a new level of despair.

“I feel very weak, very pessimistic,” Maamoun Abdulkarim, Syria’s director general of antiquities, said in a phone interview from Damascus, adding that with his inability to protect Palmyra, “I became the saddest director general in the world.”

Syria’s antiquities, including cities that for thousands of years have been among the world’s most important crossroads, are “not for the government or the opposition, they are for all Syrians,” he said. “It’s for you also – for American people, for European people, for Japanese people. It’s all your heritage.”

The wrecking of the Temple of Baal Shamin in Palmyra over the weekend was a new shock for Syrians and for experts and antiquities enthusiasts worldwide. It was the first time since seizing Palmyra from the government in May that Islamic State militants had destroyed a major part of the sprawling complex of stone buildings that still rise majestically from the desert 20 centuries after the city’s heyday.

Irina Bokova, the director general of Unesco, the United Nations’ cultural body, in a statement called the destruction “a new war crime and an immense loss for the Syrian people and for humanity”.

Typically, Islamic State has has sought to maximise the propaganda value of such acts, often waiting to carry out or publicise them when it has suffered military defeats. The temple was relatively small compared with the complex’s grandest structures, such as the Temple of Baal and the city’s largest colonnades. But it was one of the most complete and best-preserved structures at the site, a boxy stone building with a portico supported by columns.

Bokova said the destruction threatened to erase the diversity that has characterised what is now Syria for millennia. “The art and architecture of Palmyra, standing at the crossroads of several civilizations, is a symbol of the complexity and wealth of the Syrian identity and history,” she said. “Extremists seek to destroy this diversity and richness, and I call on the international community to stand united against this persistent cultural cleansing.”

Islamic State, also known as Isis, Isil or Daesh, has set about destroying objects and buildings that it views as idolatrous under its interpretation of Islam, even as it has also proved willing to sell them for profit. In northern Iraq, it has bulldozed mud-brick ruins at Hatra and Nimrud and ransacked the Mosul Museum. In eastern Syria, it has illegally excavated and sold countless artifacts, following the example of many other parties in the war.

In Syria, its rampages follow years of clashes between other combatants – the forces of President Bashar al-Assad and the insurgents who have been trying to topple him since his bloody crackdown on protesters in 2011. In the more populated, western half of Syria, those battles have severely damaged some of the world’s most renowned antiquities, like the Crusader-era castle Krak des Chevaliers and the medieval citadel of Aleppo.

Neither government forces nor their armed opponents have taken much care to preserve historical structures, and both have used medieval castles and winding alleyways for the defensive purposes for which they were originally built. Yet at the same time, Syrians in both government-held and insurgent-held areas have worked to preserve historic sites – including Abdulkarim and his onetime colleague Amr al-Azm, a former antiquities official who now supports the opposition.

Such efforts, Abdulkarim said, “defend the honour of Syrian identity, heritage and memory”. “With the opposition, we will have some kind of compromise,” he said, in striking remarks for an official in Damascus, where the government sometimes refers to all opponents as terrorists. “At the end of the day, it is politics,” Abdulkarim added. “But with Isis, it is different. Isis will attack all things.”

Abdulkarim said he was proud of the 2,500 employees in his department, working “in areas under control of the government and also under control of the opposition”, saying they had saved some 300,000 objects, but were unable to protect all of Syria’s 10,000 archaeological sites.

Al-Azm has worked with a group of Syrians he calls the Monuments Men, documenting destruction and looting and taking measures to protect antiquities, including encasing precious mosaics in protective coating and sandbags in a museum in the northern town of Maarat al-Noaman. The museum was later hit in a government bombing.

Abdulkarim, a professor at Damascus University, said he received no extra salary for his work with the antiquities department and described himself as “not a political man”. He said that he and his wife, who also holds a doctorate in archaeology, decided to stay in Damascus despite the war and “accept this impossible mission” because of their love for history and diversity; for him it is personal as well as intellectual, given his Armenian, Syriac Christian and Kurdish heritage.

But he said that he felt “bowled over” by the destruction he has been unable to prevent, from the latest attacks in Palmyra to the felling of the minaret of the Umayyad Mosque in Aleppo – where the combat is between the government and other insurgents, not with Isis.

“How can I accept what happened in my country, to our rich culture?” he said. People in Palmyra, too, tend to be personally invested in protecting the ruins regardless of their political stripes. Civilian opposition activists long documented thievery at the site, as well as its use for military purposes. Insurgents for a time occupied a major temple, which was hit by a government mortar, and army forces moved artillery and tanks on to the site and used the medieval citadel as a fortress.

Current and former government employees helped to hide and protect some portable artifacts; one employee was Khaled al-Asaad (83), the retired director of antiquities at Palmyra who was beheaded by Islamic State last week.

A cafe owner from Palmyra who generally supports the government lamented the destruction, speaking by telephone as he prepared to leave for Turkey by boat, perhaps for good. It was a local tradition, he said, to hold weddings at the temple. A nut tree grew inside its walls, residents said, where men sometimes played the oud. “They used to bring the bride and groom inside,” he said, speaking on condition of anonymity because he feared for his safety. “People used to go there to drink tea, coffee and barbecue. All these memories have gone.”