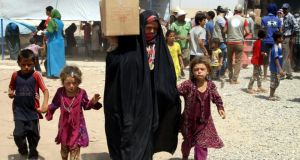 Militant group Islamic State has ordered all girls and women in and around Iraq’s northern city of Mosul to undergo female genital mutilation (FGM), the United Nations said today.

The “fatwa” issued by the Sunni Muslim fighters would potentially affect 4 million women and girls, UN resident and humanitarian coordinator in Iraq Jacqueline Badcock told reporters in Geneva by videolink from Arbil.

“This is something very new for Iraq, particularly in this area, and is of grave concern and does need to be addressed,” she said.

“This is not the will of Iraqi people, or the women of Iraq in these vulnerable areas covered by the terrorists,” she added.

No one was immediately available for comment from Islamic State which has led an offensive through northern and western Iraq.

FGM, the partial or total removal of external female genitalia, is a tradition practised widely in many African and Muslim countries and often justified as a means of suppressing a woman’s sexual desire to prevent “immoral” behaviour. Worldwide, more than 130 million girls and women have undergone FGM