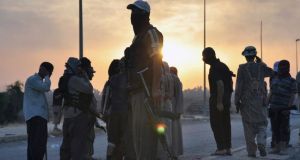 After seizing the Iraqi cities of Mosul and Takrit, the Islamic State of Iraq and Syria (Isis), also known as Islamic State in Iraq and the Levant, has announced it intends to continue its offensive until it reaches the capital Baghdad and Shia holy city Kerbala.

Isis is not alone in this campaign. It could not have captured Mosul, in the far north, and swept down the Euphrates valley to Dhuluiyah, 90km to the north of Baghdad, without the backing of powerful Sunni tribesmen and veterans of the old Iraq army demobilised by the US occupation administrator Paul Bremer in mid-2003.

The number of well armed tribesman in the offensive exceeds by several times the figure for Isis fighters, who number several thousand and are stretched thin from Raqqa in north-central Syria in the east to the Euphrates valley in the west.

Mosul is both a prize and a symbol of Isis power. In a Twitter statement Isis announced it had captured Mosul to “open up the province [of Nineva] completely and cleanse it of apostates”,

Shias, heterodox Shia Alawites, Christians and members of other minorities as well as those who do not follow the puritanical regime dictated by the radical movement.

Considering itself a state rather than an armed faction, Isis imposes its version of Islamic law and its own Sharia courts in areas it conquers. Isis regards its rule as God’s rule and opponents are punished severely.

Raqqa serves as a model of Isis’s occupation. Shops are made to close at prayer times, male civilians are required to grow beards and attend prayers, and women to cover completely, including their faces. At least one Syrian teenager has been shot dead for making a joke involving the prophet Muhammad.

Child soldiers are recruited for front line units. Kidnappings, hostage holding and executions by firing squads or beheadings have been commonplace. People

have been crucified and bodies left on roadsides for days as messages to residents to submit to Isis rule. The dead have been dumped into mass graves rather than buried in accordance with Muslim rituals.

In Raqqa, the country’s only provincial capital under insurgent control, Isis initially attacked and burned churches. Later the movement demanded that Christians pay a tax consisting of half an ounce (14g) of gold and accept limitations on the exercise of their faith in exchange for “protection”.

Christians were presented with three options: conversion to Islam; acceptance of Isis requirements; or death. Some Christians accepted conditions; but most departed.

Isis dogma is anti-Islamic, for Muslims are told in the Koran “There is no compulsion in religion” (Sura II, verse 256) and enjoined to respect Christians and Jews, regarded as “people of the book”.

When Isis seized control of the Iraqi cities of Ramadi and Falluja early this year, thousands of civilians fled. Similarly 500,000 from Mosul, a city of two million, have left since Isis entered Tuesday.

Most of the refugees have gone to Iraq’s autonomous Kurdish region, which is already host to 250,000 Syrians, many of them Kurds, seeking sanctuary from that country’s civil war and Isis battles with Syrian Kurdish militias.