An offshoot of al Qaeda which has captured territory in Iraq and Syria has declared itself an Islamic "caliphate" and called on factions worldwide to pledge their allegiance, in a statement posted on Islamist websites and Twitter. Video: Reuters 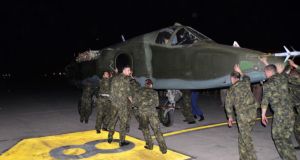 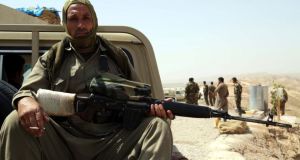 A member of the Kurdish Peshmerga troops with his weapon sits in a vehicle as they secure an area in the town of Sulaiman Pek in Salahuddin province. Photograph: Yahya Ahmad/Reuters

An offshoot of al-Qaeda which has captured swathes of territory in Iraq and Syria has declared itself an Islamic “Caliphate” and called on factions worldwide to pledge their allegiance, a statement posted on jihadist websites said today.

The move is an expansion of the group’s ambitions to wage a holy war and posed a direct challenge to the central leadership of al-Qaeda, which has already disowned it.

“He is the imam and khalifah (Caliph) for the Muslims everywhere,” the group’s spokesman Abu Muhammad al-Adnani said in the statement, which was translated into several languages and an Arabic audio speech.

“Accordingly, the “Iraq and Sham” (Levant) in the name of the Islamic State is henceforth removed from all official deliberations and communications, and the official name is the Islamic State from the date of this declaration,” he said.

“Whatever judgments are made in terms of its legitimacy, (the) announcement that it has restored the Caliphate is likely the most significant development in international jihadism since 9/11.

“The impact of this announcement will be global as al-Qaeda affiliates and independent jihadist groups must now definitively choose to support and join the Islamic State or to oppose it.”

Fighters from the group overran the Iraqi city of Mosul last month and have advanced towards Baghdad. In Syria they have captured territory in the north and east, along the frontier with Iraq.

“It is incumbent upon all Muslims to pledge allegiance to (him) and support him...The legality of all emirates, groups, states, and organizations, becomes null by the expansion of the khalifah‘s authority and arrival of its troops to their areas,” the statement said.

Meanwhile, insurgents brought down an army helicopter over the northern city of Tikrit earlier today as the military sent in tanks to try to dislodge them on second day of a major pushback against a Sunni militant takeover of large stretches of Iraq.

In Baghdad, threatened by the rebel advance, top Shia, Sunni and Kurdish lawmakers scrambled to agree cabinet nominations before parliament meets on Tuesday to try to prevent the rebel advance threatening Iraq’s future as a unitary state.

They are racing against time as Sunni insurgents led by Isis, which loathes prime minister Nuri al-Maliki’s Shia-led government, consolidate their grip on the north and west.

Mr Maliki’s political future will be the most contentious issue.

Troops backed by helicopter gunships began the assault on Tikrit, the birthplace of former president Saddam Hussein, yesterday, to try to take it back from insurgents who have swept to within driving range of Baghdad.

The army sent in tanks and helicopters to battle Isis militants near the University of Tikrit in the city’s north today, security sources said. Two witnesses said they saw a military helicopter gunned down and crash near a market.

Iraqi army spokesman Qassim Atta told reporters in Baghdad security forces had killed 142 “terrorists” over the last 24 hours across Iraq, including 70 in Tikrit, and said the armed forces were in control of Tikrit’s university. Both claims were impossible to immediately verify.

“Our security forces have taken complete control of the University of Tikrit and they have raised the Iraqi flag on top of the building,” Mr Atta said.

The offensive was the first major attempt by the army to retake territory after the United States sent up to 300 advisers, mostly special forces, and drones to help the government take on Isis

Earlier today, deputy prime minister for energy Hussain al-Shahristani, one of Iraq’s most senior politicians, faulted the US for not doing enough to bolster the country’s military.

“Yes, there has been a delay from the Americans in handing over the contracted arms. We told them, ‘You once did an air bridge to send arms to your ally Israel, so why don‘t you give us the contracted arms in time?’” he told al-Hurra television.

US officials have disputed similar statements from Iraqi officials in the past and say they have done everything possible to ensure the country is equipped with modern weaponry.

In a sign of Iraq’s attempts to bolster its lacklustre air force, five Russian Sukhoi jets were delivered to Baghdad late yesterday, which state television said “would be used in the coming days to strike Isis terrorist groups.”

‘Who’s in charge?’ TDs warn time for Government, not health advisers to decide