Around 600,000 forced to flee their homes as IS militants targeted religious minorities 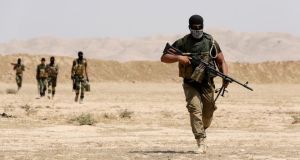 Asaib Ahl al-Haq Shia militia fighters from the south of Iraq and Kurdish peshmerga forces walk with their weapons as they take control of Sulaiman Pek from the Islamist State militants, in the northwest of Tikrit city today. Photograph: Youssef Boudlal/Reuters

At least 1,420 people were killed in Iraq in August, the United Nations said today, as sectarian violence raged in the centre and north of the country.

Another 1,370 Iraqis were wounded and 600,000 people forced to flee, the UN added, as Islamic State militants, who have grabbed large areas of territory since June, pushed into land controlled by Kurdish troops and targeted religious minorities.

“Thousands continue to be targeted and killed by Isil (Islamic State) and associated armed groups simply on account of their ethnic or religious background ... The true cost of this human tragedy is staggering,” said the UN representative in Iraq, Nickolay Mladenov.”

The UN said the casualty figures could be far higher, but it could not get indepent verification of reports of hundreds of incidents in areas under Islamic State’s control.

Both Islamist fighters and Iraqi government forces have committed atrocities in the three months of fighting, senior UN officials said in Geneva during an emergency debate on the conflict today.