How Yemen slid from territorial disputes to religious war 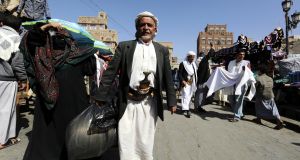 Yemenis walk through a market in the old city of Sana’a on February 11th. Some 6,000 combatants and 10,000 civilians have died in the current conflict in Yemen. Photograph: Yahya Arhab

The Saudi war on Yemen launched in March 2015 is not the first and is unlikely to be the last conflict between these tribal states.

Conflict in the post-first World War era began in 1932 with a territorial dispute between the newly-minted, expansionist Wahhabi Sunni state founded by Abdel Aziz ibn Saud and the 900-year-old monarchy headed at that time by Zaydi Shia Imam Yahya.

During this war the Saudis seized the Yemeni Red Sea coastal regions of Asir and Jizan and the province of Najran. They were formally ceded to Saudi Arabia in 1934, creating an enduring Yemeni grievance.

When in 1962, the last Yemeni king, Imam Mohamed al-Badr, was overthrown and a republic was proclaimed in the north, Yemen sought to recover the three lost provinces. A second war ensued with Egyptian forces backing the republic and the Saudis deposed the imam.

The conflict ended with Badr’s defeat in 1970. Saudi Arabia offered financial aid with the aim of securing leverage over the weak government in North Yemen. However, the republic was strengthened by the 1990 union of the North with the South, which had become independent as the People Republic of Southern Yemen in 1967. This alarmed the Saudis who have always sought to assert their hegemony over the Arabian Peninsula.

The new Yemeni republic signalled it would take an independent Arab nationalist line in regional politics by rejecting the Saudi-backed US-led military campaign to drive Iraqi forces from Kuwait. Riyadh responded by expelling Yemeni workers from the kingdom, creating serious financial hardship due to the loss of expatriate earnings.

Yemen descended into civil war in 1994 when separatists in the south, armed by the Saudis, demanded independence. When the war ended the Saudis provided funds to the cash-strapped government in Sana’a, the Yemeni capital, exacting from former president Ali Abdullah Saleh a new treaty reconfirming the 1934 borders with the three contested provinces. Asir tribemen who protested were placated with bribes.

Simmering Yemeni anger over the three provinces, Saudi efforts to convert Sunni Yemenis to puritan, intolerant Wahhabism, and marginalisation of the Zaydis, fuelled a Houthi rebellion, which escalated after the movement’s leader Hussein al-Houthi was killed in 2004.

Five years later Riyadh was humiliated when Saudi troops were defeated by the Houthis, whose Saada province borders Najran. The rebels took part in the 2011 Arab Spring protests, which brought down Saleh and led to the 2012 elevation to the presidency of Abed Rabbo Mansour Hadi in an uncontested “election”.

Demanding fair representation in government and an end to corruption, the Houthis, backed by army units loyal to Saleh, took control of Sana’a, drove Hadi into exile in Saudi Arabia, and seized territory thoughout the country.

Riyadh, alleging the Houthis are supported by Tehran, pressed into service Sunni Gulf allies and launched a war on Yemen supported by the US and Britain which are arming the Saudis. This campaign has transformed the longstanding Saudi-Yemeni territorial dispute and the short-lived Yemen civil conflict into a Sunni-Shia war fuelled by the Saudi-Iran competition for regional influence.

The political vacuum caused by the conflict has led to the rise of al-Qaeda and Islamic State, also known as Isis, in Yemen and resurgence of south Yemeni separatism.

The UN has proposed a ceasefire, formation of a unity government, and withdrawal of Houthi fighters and heavy weapons from areas they hold. The Houthis want the unity government in place before they disarm and depart and insist Hadi must step down, a demand he and Riyadh reject.

So far, 6,000 combatants and 10,000 civilians have died and the public infrastructure and manufacturing, and agricultural sectors of the country have been devastated. The UN says the population, the poorest in the region, is on the brink of starvation.