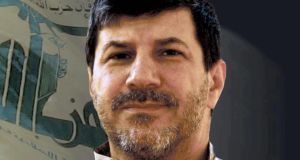 Undated handout made available by Hizbullah’s media office of Hassan al-Laqqis, a senior commander with the Lebanese Shia militant group, who was reported killed overnight outside his home in Beirut. Photograph: EPA

Lebanon’s Shia militant Hizbullah group has said one of its commanders was killed outside his Beirut home in an overnight attack which it blamed on Israel.

Israel denied any role in the killing of Hassan al-Laqqis, which Hizbullah said took place at around midnight in the southern Hadath district of the Lebanese capital.

A previously unknown group, Ahrar al-Sunna Baalbek brigade, claimed responsibility for the attack in a message on Twitter. The group’s name suggested it had Lebanese Sunni Muslim links.

Hizbullah, which fought a 34-day war with Israel in 2006, has sent fighters into neighbouring Syria to support President Bashar al-Assad against mainly Sunni Muslim rebels, an intervention which has helped fuel sectarian tension in Lebanon.

A source close to Hizbullah said Mr Laqqis was a military commander who had taken part in battles in Syria. He said Mr Laqqis had been shot in the head with a silenced gun while in his car in what he described as a professional operation.

Footage from the scene broadcast by Hizbullah’s Al Manar television showed two bullet marks in a wall and muddy footprints it said had been left by possibly more than one assailant.

Hizbullah described Mr Laqqis, who will be buried in the Bekaa Valley town of Baalbek later in the day, as “one of the leaders of the Islamic resistance” against Israel, and said he had been frequently targeted by the Jewish state.

He had been with Hizbullah since its first days in the 1980s, when it was set up with Iranian support to fight Israeli troops occupying south Lebanon, and his son was killed in the 2006 war, the militant group said in a statement.

“The Israeli enemy tried to get to our martyr brother several times, in more than one location, but these attempts failed until this repugnant assassination,” it said.

Israel would “bear full responsibility and all the consequences for this heinous crime”, it added.

But Israel denied involvement. “This has strictly nothing to do Israel,” foreign ministry spokesman Yigal Palmor said.

“Hizbullah has made a fool of itself in the past with these automatic and groundless accusations against Israel ... If they are looking for explanations as to what is happening to them, they should examine their own actions.”

The open role of Hizbullah fighters in the Syrian civil war, combined with a steady flow of Lebanese Sunnis joining the anti-Assad rebels, has fuelled sectarian strife in Lebanon.

Car bombs killed dozens of people in Beirut in August and a twin suicide attack on the Beirut embassy of Hizbullah’s patron Iran killed at least 25 people last month.

An Iranian foreign ministry spokeswoman blamed Israel for that attack, but responsibility was claimed by a Lebanon-based al Qaeda-linked group, the Abdullah Azzam brigades.

Hizbullah leader Sayyed Hassan Nasrallah said he believed the group had support from Saudi Arabia, Iran’s main regional rival, whose backing for Dr Assad’s foes has pushed it deeper into a proxy conflict in Syria against Tehran.

Abdullah Azzam “is not a fictitious name”, Mr Nasrallah said in an interview broadcast on Lebanese television last night. “This group exists ... It has its leadership ... and I am convinced it is linked to Saudi intelligence,” he said.

“Saudi Arabia is the one who runs these kinds of groups in several places in the world.”