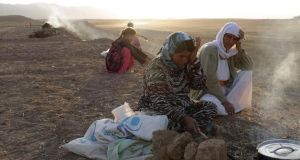 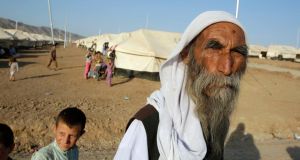 A man from the minority Yazidi sect fled violence in the Iraqi town of Sinjar. He stands looks on in Bajed Kadal refugee camp. Photograph: Youssef Boudlal/Reuters

Hundreds, possibly thousands, of Iraqis who fled the advance of Islamic State (Isis) militants by climbing a mountain near the Syrian border remain stranded on the barren peak with no hope of relief, according to satellite photographs and interviews with members of the Yazidi religious minority still trapped on Mount Sinjar.

There has not been an air drop of food, water or medicine to the mountain since August 13th, when US special forces troops visited the mile-high ridge and reported that conditions were not as dire as Washington initially thought.

The Obama government considers its response to the humanitarian crisis on the mountain to have been a success.

Mr Obama declared that US warplanes and Kurdish forces “broke the siege of Mount Sinjar” after US air strikes against Isis positions early this month.

But telephone interviews with Yazidis still on the mountain and satellite imagery indicate a continuing humanitarian emergency.

While thousands have fled down the mountain’s north face, making a dangerous trek into Iraqi Kurdistan through Syria, those who remain on the southern side have in effect been abandoned.

Survivors of the Isis siege describe leaving behind their elderly and infirm relatives.

Isis fighters remain on the lower slopes of the mountain, confronted by a small and desperate Yazidi force.

The younger Yazidis who have stayed behind talk of fighting Isis until they either liberate Sinjar city below or die.

“We need weapons now more than food or water,” Salim Hassan, a Yazidi fighter on the mountain, said.

The Pentagon estimated two weeks ago that 4,000-5,000 people remained on the mountain, and says it cannot offer a more current estimate.

The US Agency for International Development assesses that perhaps 2,000 remain.

The UN mission to Iraq pegged the residual population at “a few hundred who did not want to leave,” according to spokeswoman Eliana Nabaa.

US central command would not say if it had assessed that Isis forces remained beneath Mount Sinjar.

American efforts have moved on to planning an attack on Isis forces in Syria, where US surveillance flights have begun.

All US air strikes at the foot of Mount Sinjar occurred below its southern, southwestern and southeastern faces, where Isis forces apparently positioned themselves for the siege.

The main pathway off the mountain comes from its north face, though some have escaped from the west.

Those on the southern slope appear stranded.

Two people recently on Mount Sinjar have reported that they ascended the southern face only after Isis fighters prevented them from taking what they thought would be a safer route to the northern face.

Photographs taken by ImageSat International on August 21st show that the southern slope of the mountain is dotted with dark rectangles: trucks that brought people up the heights.

“The southern slope is conspicuously sparse, and some areas have visible burn marks,” said Alex Imas, an ImageSat analyst.

Overall, Mr Imas said, “the look of it all speaks of movement, people on the run, chaos.”

A retired military officer experienced in satellite imagery analysis said there appeared to be “scores” of cars and trucks in the image.

ImageSat captured a single day’s worth of imagery over Mount Sinjar, so it cannot show changes over time.

Nor did it capture the entire mountain, an area of around 2,000 sq km, which perhaps helps to account for the relative paucity of clearly identifiable people. The Guardian supplemented the imagery by interviewing Yazidis still on and recently off the mountain, US government officials and international aid workers.

Afflicted with diabetes and heart problems, he has been without his medications since he fled his nearby home on August 3rd.

He spoke to the Guardian via a mobile phone recharged through the battery of a water tanker brought in by Kurdish peshmerga fighters.

“The scene of starving kids as well as elderly people is really heartbreaking and I can assure you that many kids have died on the mountain for lack of food and water,” Mr Sulaiman told the Guardian on August 18th.

With his family, Mr Sulaiman drove from his home to the southern slope, but they had to abandon their car.

Seven men carried him up the mountain on a stretcher.

His wife, sons and daughters and their families have managed to escape into Iraqi Kurdistan, “but I’m still here with the old members of the family”, he said, aided by his young nephew.

“My pillow is a small rock and my bed is crumpling ground where there is no water, no food, no single cigarette to smoke. Sometimes, my brother would get me a piece of bread, but I’m too ill and have no appetite to eat. I just want to be lifted out of here,” he said.

Bassima Salim, from the nearby town of Sinjar, survived two weeks on top of the mountain before evacuating from the northern slope into Zakho, a town in Iraqi Kurdistan on the Turkish border.

Corroborating Mr Sulaiman’s tale, she told the Guardian that before making the 30-hour journey on foot, with minimal provisions, through Syria - families had to make a heart-wrenching calculation.

“Not all members of the family can stand such a strenuous trip,” she said.

“The decision was to break up into two groups, some of us to remain with the old parents at the mountain and others to march to the checkpoint to find a shelter in Kurdistan and to bring the entire family later on.”

US central command said on August 13th that it had “no indications of ineffective air drops”.

But both Mr Salim and Mr Sulaiman said they were unable to access food or water dropped by American military cargo planes.

“I heard a lot about US planes dropping aid to the Yazidi refugees stranded on the mountain, but I swear to God I have not got anything till today,” he said, five days after the final airdrop.

Gustavo Fernandez, the northern Iraq operations chief of Medecins Sans Frontieres, said local authorities report that 500 families remain on the mountain, as “apparently they have chosen to stay there”.

Those escaping have slowed to a trickle. “We see very few people arriving into Syria, around 50 [per]day,” Mr Fernandez said. “They are tired and hungry, but not in critical health conditions.”

The Obama administration has said little about the situation at Mount Sinjar since August 14th, when the president declared the siege broken.

After US missiles began striking Isis near the Mosul Dam - the locus of the vast majority of US air strikes - international attention turned away from the Yazidis and now centres on speculation of an American bombing campaign in Syria.

But Isis fighters remain below the mountain, said Hassan, who has stayed behind to try to retake his Sinjar home away from the jihadist army.

“I made an oath not to leave my place on the mountain till I die or Sinjar is liberated,” he said in a telephone call.

Hassan said that he and others descend the mountain in shifts to ambush Isis forces, firing until their ammunition stocks are depleted.

While he credits American air strikes for “easing the burden on us”, he wants weapons from the US, and blames the Kurdish peshmerga for letting Sinjar fall.

It is unclear if the US will do anything more to aid the residual population of Mount Sinjar, which played a central role in Obama’s rationale for returning the US to war in Iraq.

“I lost my son, as well as my neighbour, but we were able to kill many Isis fighters and then withdraw to the mountain,” Hassan said, where he and scores more remain.