Families of hostages killed by ‘Jihadi John’ want him captured 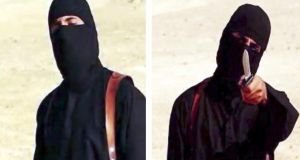 A composite image showing two still frames from video released by the Islamic State (IS) showing an unidentified IS militant who was pictured threatening US freelance journalist Steven Sotloff and British journalist David Cawthorne Haines before they were killed at an unknown desert location. Media reports suggest the masked militant known as ‘Jihadi John’ may have been identified as Mohammed Emwazi, born in Kuwait and who lived for much of his life in London. Photograph: EPA

The family of Steven Sotloff, a journalist murdered by the Islamic State group last year, said they want to see his killer “Jihadi John”, identified in media reports as Londoner Mohammed Emwazi, brought to justice.

A spokesman for the family of Mr Sotloff said: “We want to sit in a courtroom, watch him sentenced and see him sent to a supermax prison.”

Mr Sotloff was described as “extremely kind” and “extremely gentle” by a former confidante, but family members of his victims, including US journalist Steven Sotloff and British aid worker David Haines, called for him to be brought to justice.

Sir Menzies Campbell, a member of the Intelligence and Security Committee (ISC), said the parliamentary committee was likely to seek answers from the security services about what information they held on “Jihadi John”, but not until after the general election.

Reacting to reports, Mr Haines’ wife Dragana told the BBC seeing the extremist captured would give the families “moral satisfaction”.

She said: “Ever since we found out David had been murdered I was hoping that this man would be identified and be caught, but it’s difficult to be reminded of it all again.

“I hope he will be caught alive - I think that’s the only, I don’t know, moral satisfaction of all the families of all the people that he murdered because if he gets killed in heavy action it will be an honourable death for him and that’s the last thing I would want for someone like him. “I think he needs to be put to justice but not in that way.”

Security services are also facing mounting questions over claims that the British graduate believed to be “Jihadi John” was known to MI5.

Earlier, Mr Qureshi said he had come to know “beautiful young man” Mr Emwazi before he fled for Syria.

Mr Qureshi said the country’s national security policy “only increased alienation” since the 9/11 terrorist attacks and cited similarities between the case of Emwazi and that of Michael Adebolajo, who murdered soldier Lee Rigby in Woolwich in 2013. Speaking at a press conference, Mr Qureshi described Emwazi as “the most humble young person that I knew”.

He said: “He (Emwazi) was such a beautiful young man, really. It’s hard to imagine the trajectory, but it is not a trajectory that’s unfamiliar with us. “We’ve seen Michael Adebolajo, once again somebody that I have met. He came to me for help, looking to change his situation. “When are we going to finally learn that when we treat people as if they’re outsiders, they are going to feel like outsiders and they will look for belonging elsewhere?”

He said Mr Emwazi would turn up at Cage’s offices with “posh baklava” as a way of saying thanks for assistance during his battles with security services. And in a swipe at authorities, Mr Qureshi added: “A narrative of injustice has taken root. A narrative of impunity that there is no accountability for the way in which our security agencies operate. Unless we arrest that narrative, we are just going to see these things happening over and over again.

“People will feel like they are pushed out and that they don’t have a place to belong. And when somebody is giving them a message, ‘Come, we will give you a sense of belonging’, how can argue against that?”

“Jihadi John” rose to notoriety after he first appeared in a video posted online last August, in which he appeared to kill the American journalist James Foley.

Dressed all in black with a balaclava covering all but his eyes and the ridge of his nose and a holster under his left arm, he reappeared in videos of the beheadings of US journalist Steven Sotloff, British aid workers David Haines and Alan Henning, and American aid worker Peter Kassig.

And last month, the militant appeared in a video with the Japanese hostages Haruna Yukawa and Kenji Goto, shortly before they were killed.

Kuwaiti-born Mr Emwazi is believed to have travelled to Syria in 2013, according to Cage. The organisation said his family was in “utter shock” and unable to accept that Emwazi could be “Jihadi John”.