EU deal might have averted tragic loss of life in Egypt 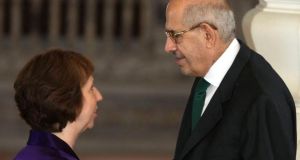 An EU-US brokered deal to end the stand-off between Egypt’s interim government and the Muslim Brotherhood over its protest camps at Cairo’s Nasr City district and Giza south of the capital might have averted the tragic loss of life when security forces dispersed the sit-ins.

The deal, which ultimately failed to get the backing of the Egyptian authorities, was put forward by EU envoy Bernardino Leon and US emissary William Burns.

The arrangement, initiated by EU foreign affairs chief Catherine Ashton during her visit to Cairo at the end of July, involved a staged reduction in protester numbers at the two sites in exchange for the phased release of 18 designated Muslim Brotherhood detainees and pledges by both sides to renounce violence and incitement. The Brotherhood would also dismantle barricades at the encampments and issue a statement condemning terrorist attacks by militants in Sinai. Dialogue between the Brotherhood and the interim government would follow with it understood that deposed president Mohamed Morsi would not be reinstated, the main demand of the protesters.

Disrupted life
Leon and Burns worked with then caretaker vice-president Mohamed ElBaradei, who was designated by the government and military to seek a peaceful end to the sit-ins which had disrupted life in the areas where they were located and created a climate of instability that was harming Egypt’s economic recovery from two years of turmoil. ElBaradei was eager to avoid confrontation but was not in a position to decide policy.

According to diplomatic sources, a breakthrough came during an August 4th-5th meeting in Tora prison with the Brotherhood’s deputy leader Khairat El-Shater. He was chosen as the interlocutor for the movement because deposed president Mohamed Morsi was seen as a figurehead and the movement’s chief guide, Mohamed Badie, as its spiritual mentor rather than as a political personality.

The process was due to begin with the release of Saad Katani, former head of the Brotherhood’s political arm, the Freedom and Justice party, and Abu El-Ela Madi, head of the Wasat party, a Brotherhood offshoot. Brotherhood leaders at Nasr City said they were prepared to go along with a plan Shater had accepted.

The effort broke down on August 7th, the night before the feast that ends the Muslim holy month of Ramadan, when the authorities warned there could be legal objections to freeing men facing charges of incitement. This led to the end of the mediation mission and the forcible clearing of the squares on August 14th, at a cost of the lives of 595 civilians and 43 policemen, according to the health ministry.

When the deal’s details – which have not been fully reported before now – were put by The Irish Times to Social Democratic Party activist and university professor Madiha Doss, she agreed with the position of the public prosecutor. “We cannot drop charges” against Brotherhood leaders who are “the biggest liars. No one trusts them,” she said, adding that people were entering and leaving the encampments and it would be impossible to verify permanent departures.

She said there were divisions in the Brotherhood and anti-Brotherhood camps as well as in the military command. “There are different shades of thinking” in all the camps. In her party some favoured a peaceful solution, others a crackdown, some wanted to reconcile with the Brotherhood, while others wanted to destroy it.

“I think that moderate Islamists could be interlocutors,” she stated, suggesting that the group called the Brotherhood Against Violence or Abdel Moneim Aboul Fatouh, who broke with the Brotherhood to form a more moderate faction, could co-ordinate efforts to halt the violence.

Criticism
She criticised the security forces for allowing so many people to gather in the squares and permitting the entry of food and water, and castigated protesters who stayed in the squares in spite of repeated warnings of an operation to clear the sit-ins.

Of the Brotherhood’s refusal to wind down the protests, she asked, “Did they not think they could do otherwise? Was there no alternative? They relied on rhetoric over reality.”

Veteran commentator Hisham Kassem said, “I am not sure there was a [viable] plan. The envoys clearly did not understand the situation.

“They cannot claim the moral ground after 30 years of [the EU and US] would-be setbacks and casualties,” he added, but not as many as in Europe before it reached democracy.