Egyptians hold their breath as pro-Morsi sit-ins drag on 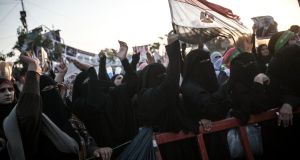 Egyptians were on tenterhooks yesterday as they expected the security forces to begin a campaign to end the two main Cairo sit-ins protesting the ousting of president Mohamed Morsi, but caretaker prime minister Hazem Beblawi did not issue the order to implement contingency plans for dispersing thousands of protesters.

The prolongation of the standoff coincided with the renewal for 15 days of the detention order imposed on Mr Morsi on charges of collaborating with the Palestinian Hamas organisation to free Muslim Brotherhood prisoners and attack police facilities in Sinai in 2011.

The postponement of action by the security forces to remove the protesters was, reportedly, due to the entry of reinforcements into the encampments once they heard dispersal could be imminent.

Divisions within the caretaker administration may also have prompted postponement. President Adly Mansour, vice-president Mohamed ElBaradei and deputy prime minister Ziad Bahaeddin are said to oppose the use of force. Opponents of the use of force argue the Brotherhood seeks violent confrontation to create “martyrs” and enable the movement to claim victimisation.

Call for action
Army chief Abdel Fattah el-Sisi has come under pressure from military hardliners, the security forces and the Tamarod (Rebel) faction which are determined to take firm action against the disruptive sit-ins.

Residents of the middle-class Nasr City neighbourhood of the Rabaa al-Adawiya mosque where the larger camp is located on a major highway junction, and businessmen with shops near Cairo University in Giza where the smaller site is situated have also been calling for protests to end. Sources in Cairo said people living near Rabaa al-Adawiya have even left their homes due to noise, pollution and fear of violence.

Critics of delay argue that Gen Sisi has failed to act on the mandate given to him by hundreds of thousands of Egyptians at the mass anti-Morsi rallies on July 26th.

Dissipation of energy
Analyst Youssef Zaki told The Irish Times that the decision to “play it cautiously is very wise”. He said the longer the people stayed in the sit-ins, the more the Brotherhood “loses ground” within Egypt since the vast majority of Egyptians wanted the country to move forward.

He also claimed the Brotherhood was revealing itself internationally as “aggressive” and “using illegal ways to protest”. He believed the authorities would “take their time” because they knew a frontal assault would be a “catastrophe”.

Keeping up verbal pressure on the Brotherhood, foreign minister Nabil Fahmy said that while Egyptians had the right to stage peaceful assemblies, the six-week stand-off could not continue indefinitely.

“Law and order has to be in place and people need to be able to have access to their homes and work . . . This situation has to be resolved very soon.

Meanwhile, Brotherhood activists marched on the high court to demand the resignation of the public prosecutor and went to the capital’s metro stations where they sprayed pro-Morsi graffiti on the walls but did not try to prevent passengers from boarding trains.